This wasn’t what I was hoping for. I booked an hour and a half camel ride for Michael and I – to watch the sunrise. What I expected was an hour and a half ride on a camel through Wadi Rum as the morning sun came up over the horizon.

What this actually was, was a 10-15 minute camel ride from our camp to a nearby location where we dismounted, then climbed up on a rock to sit for an hour and watch the sunrise, then a 10-15 minute camel ride back to camp.  An hour of that hour and a half was sitting on a rock – not riding a camel! I was very disappointed about that, especially that we paid 40 JOD that equals to about 75 CAD – to sit on a rock!  A rip off for sure!

Jordan is very expensive! But I’ll blog more about that in my conclusion of our stay in this country.

We met our guide and camels in the camp parking lot at 5:30am. It was still dark but we knew where to find them by the sounds of the camels and the conversation between the man with many camels in a large caravan – leaving behind a few camels to a guide who arrived by truck! Then the man with many camels in a caravan carried on to his next destination that I later concluded to be other nearby camps to drop off camels for the same sun rise tour. 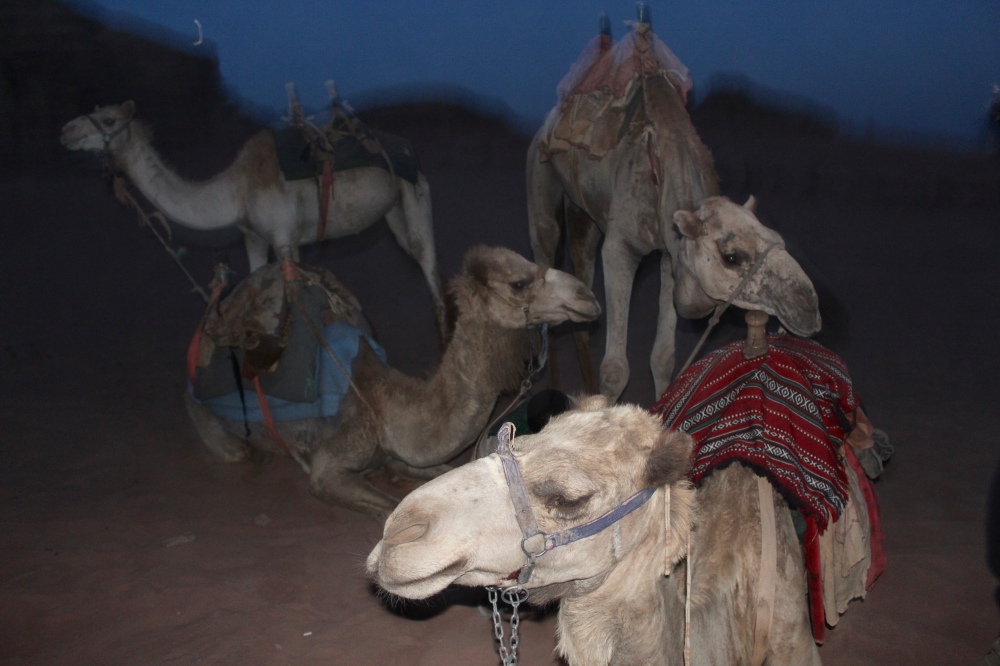 Mounting the camels in the dark was a bit daunting, as my camel was not very happy and suddenly decided to stand up – meaning his back legs go up – throwing me forward as his front legs then rise – tossing me back! Thankfully there are large horns on the saddle to hold onto! 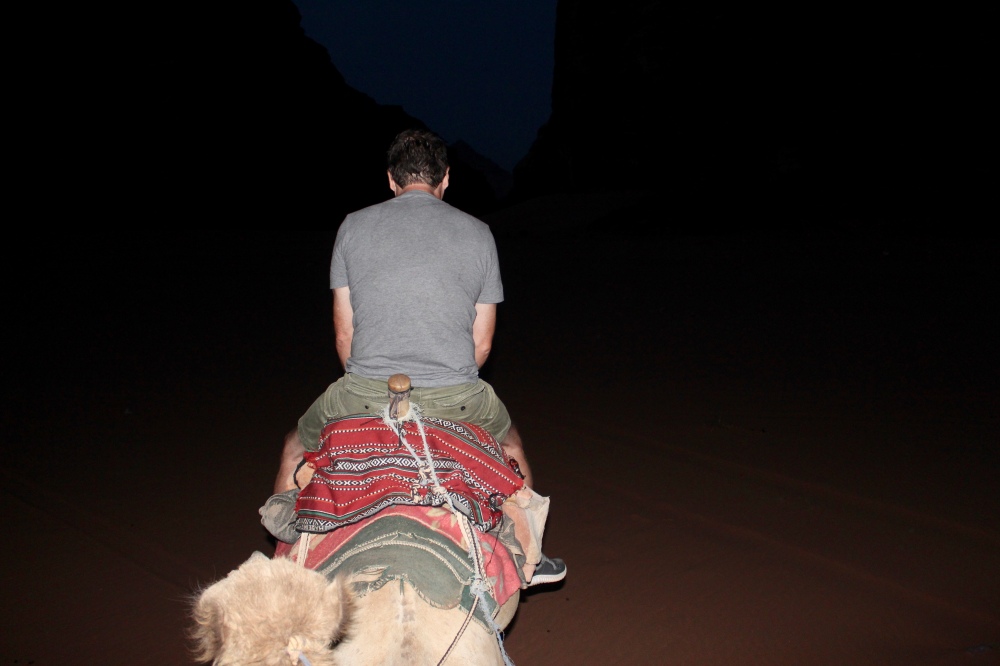 We arrived at a rock formation where our Somalian guide pointing that we would get off the camels and climb up rocks to watch the sun rise. I was surprised by this, and very disappointed because I wanted to ride the camel for the entire tour, not sit on a rock! I wondered right from the start why the guide wasn’t riding a camel himself?  Was he going to walk the entire hour and a half tour? But, nope because the tour wasn’t riding a camel – it was sitting on a rock!

Our view facing east, to watch the sun rise…

Our view, beings us to the west.

Maybe a trail left by a lizard? 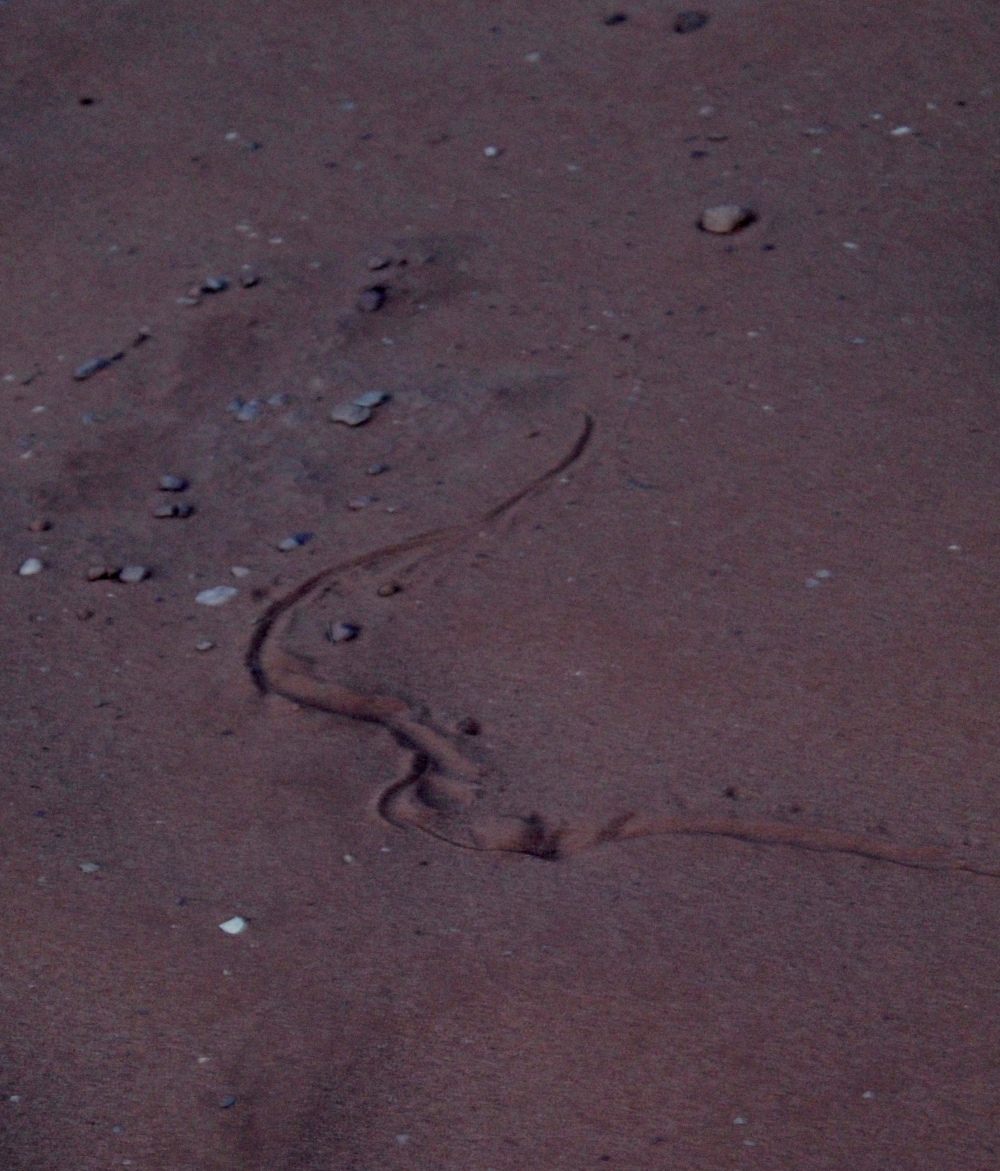 Michael starts to climb up past the rock ledge I was on!

Our guide finds a quiet place for his morning prayers. 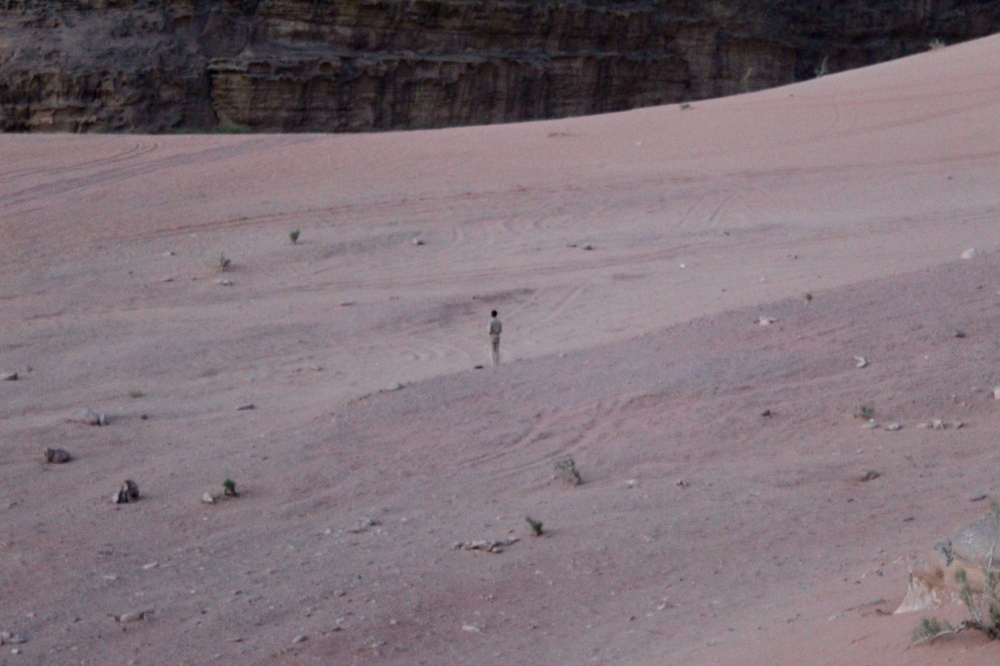 I settled in to watch the sunrise, still a bit bitter that sitting on a rock is the experience – not a camel ride! But, I started to enjoy the solitude of our surroundings. It was just Michael up on the rocks, the guide saying his prayers, the camels and me! Then a dog!

But, soon this solitude changed as different caravans approached. I quickly realized this was another gimmicky tourist location in Wadi Rum – the watch the sun rise location – not a special place picked for us by our guide!  😉 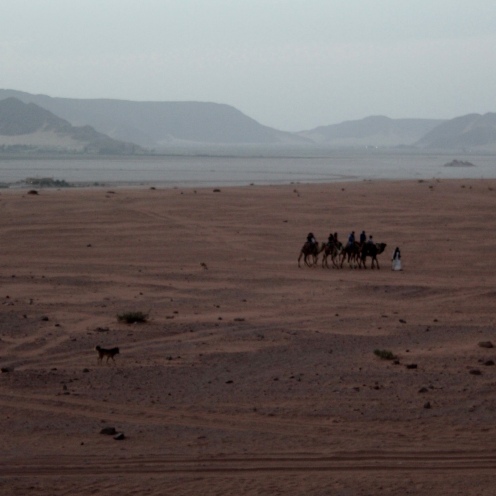 Soon our three camels had company while the guides gathered on a blanket together!

From one tour guide to four! 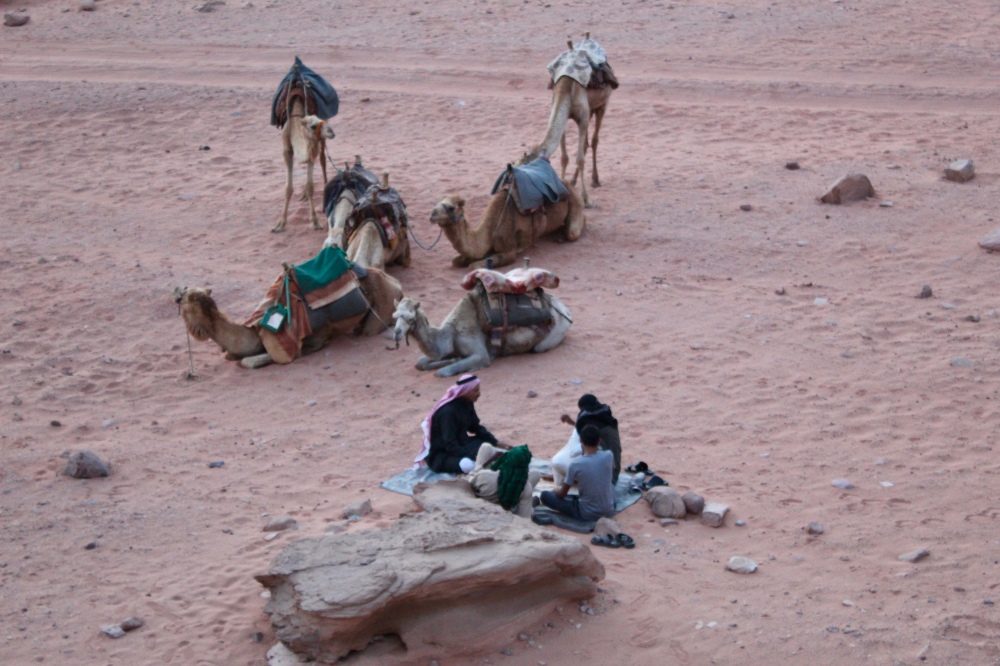 Another guide says his morning prayers. 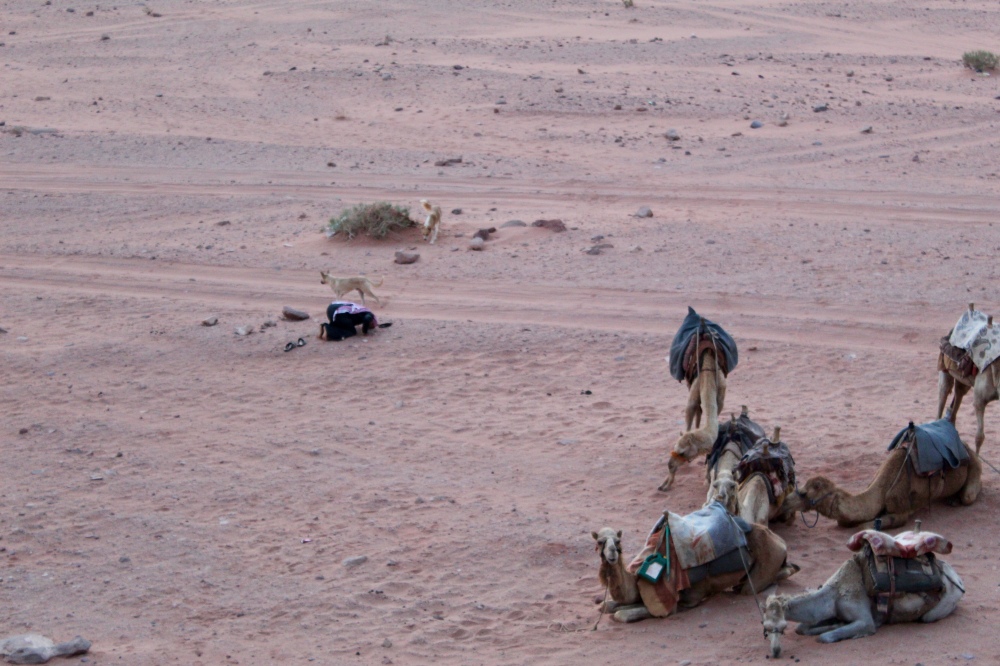 Then truckloads of more tourists arrived! Then another caravan arrived!

There are now 7 guides and at least 30 tourists crawling all over the rock!

Then some birds arrive too!

My camel scratching his face on the saddle of Michael’s camel!

Sleepy and bitter me!!

And here is what we all came to see…the sun rise! 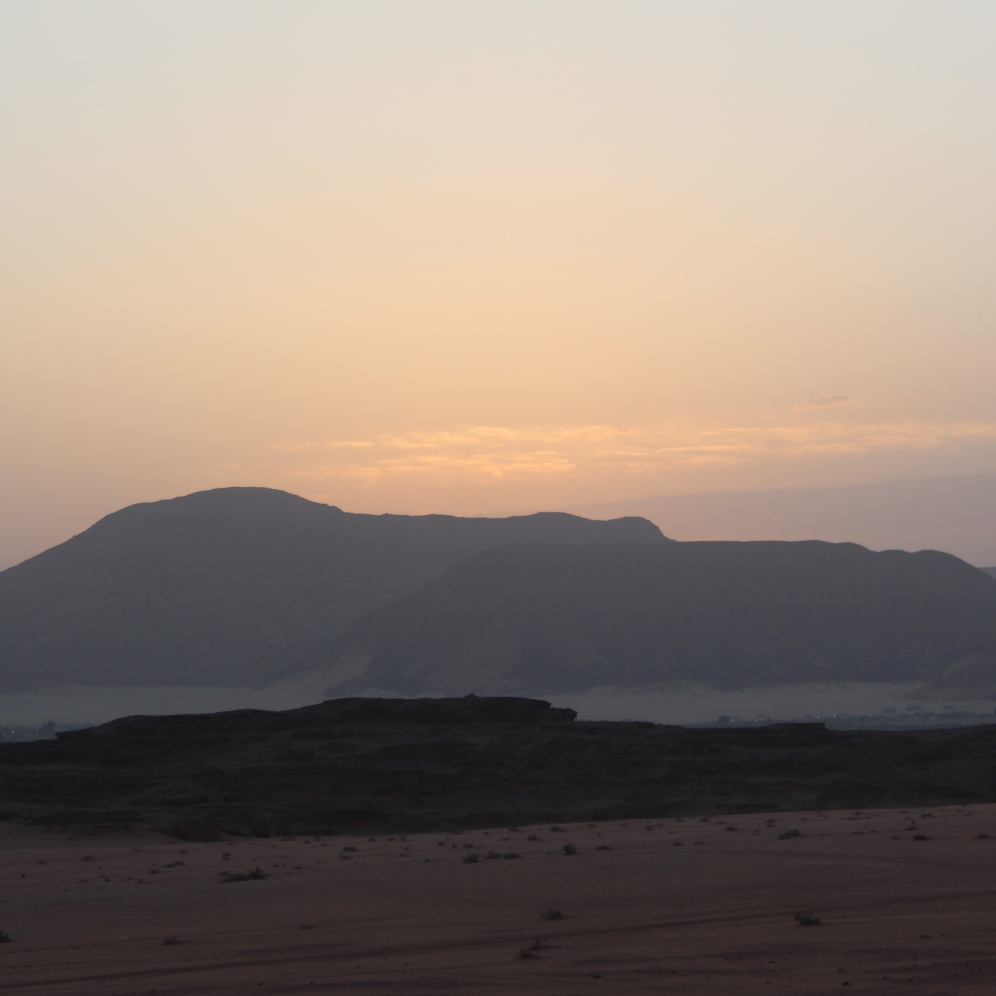 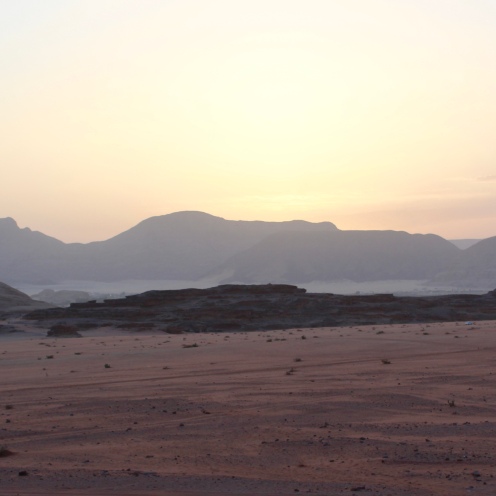 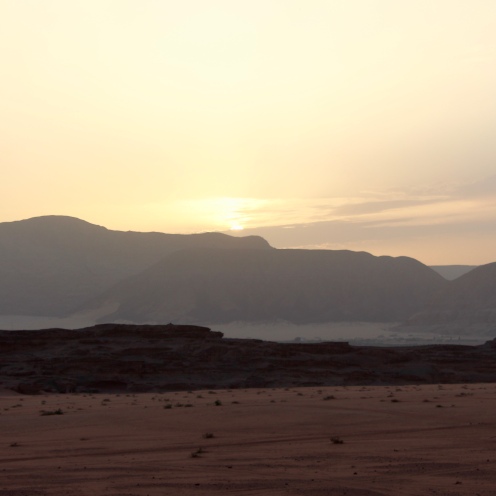 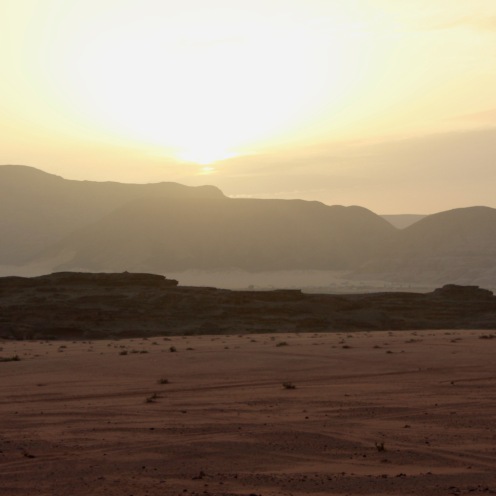 A dog watches the sunrise too… 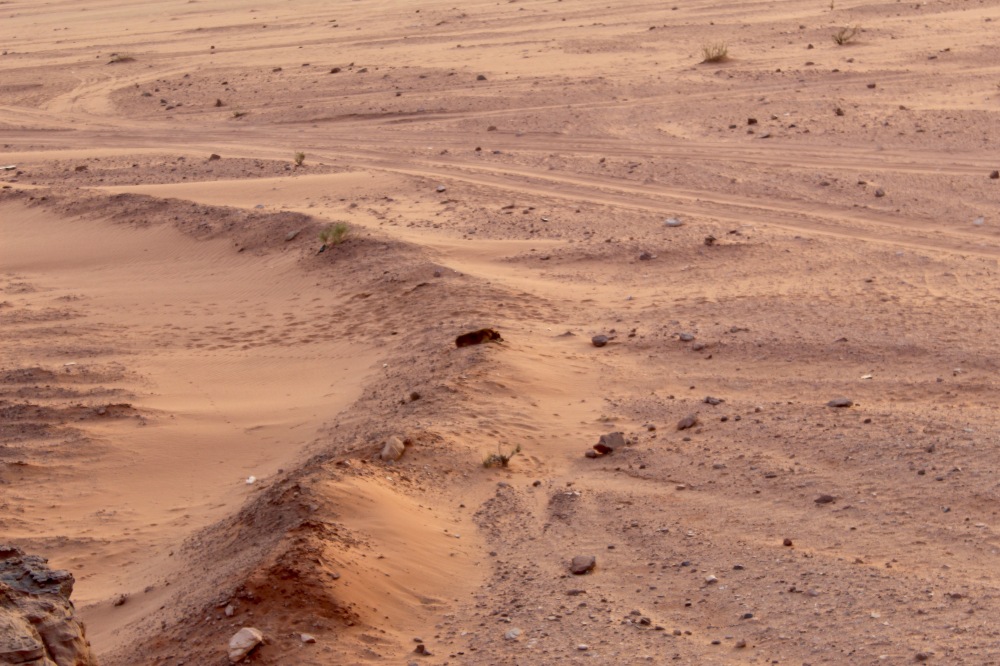 Then just like that, it was over and all the tourists climbed down from the rock to return to their caravans!

A baby camel with one of the caravans! Back in the camel saddle again! 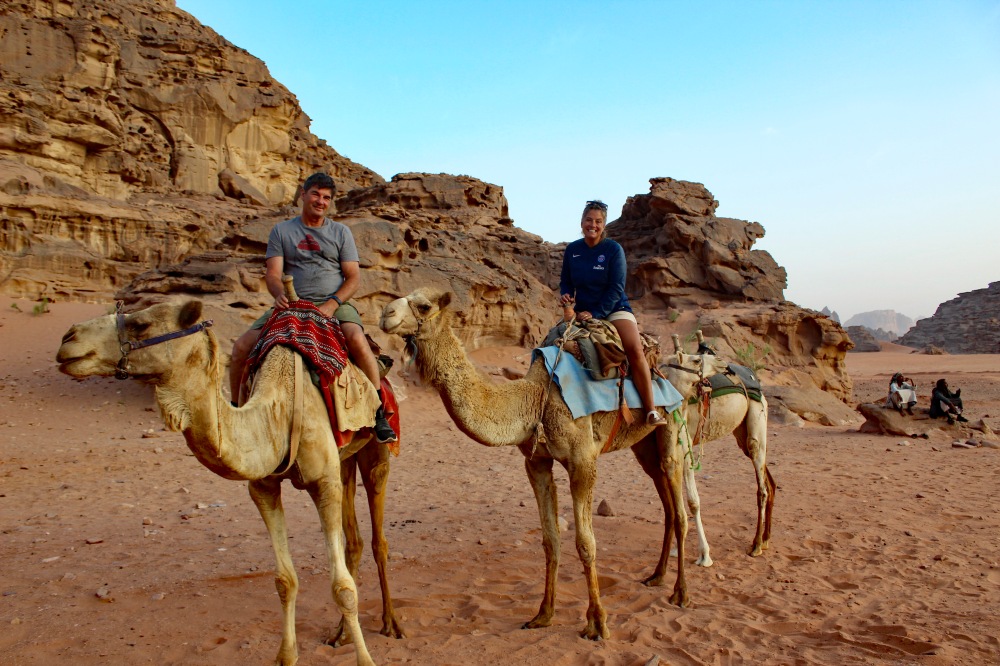 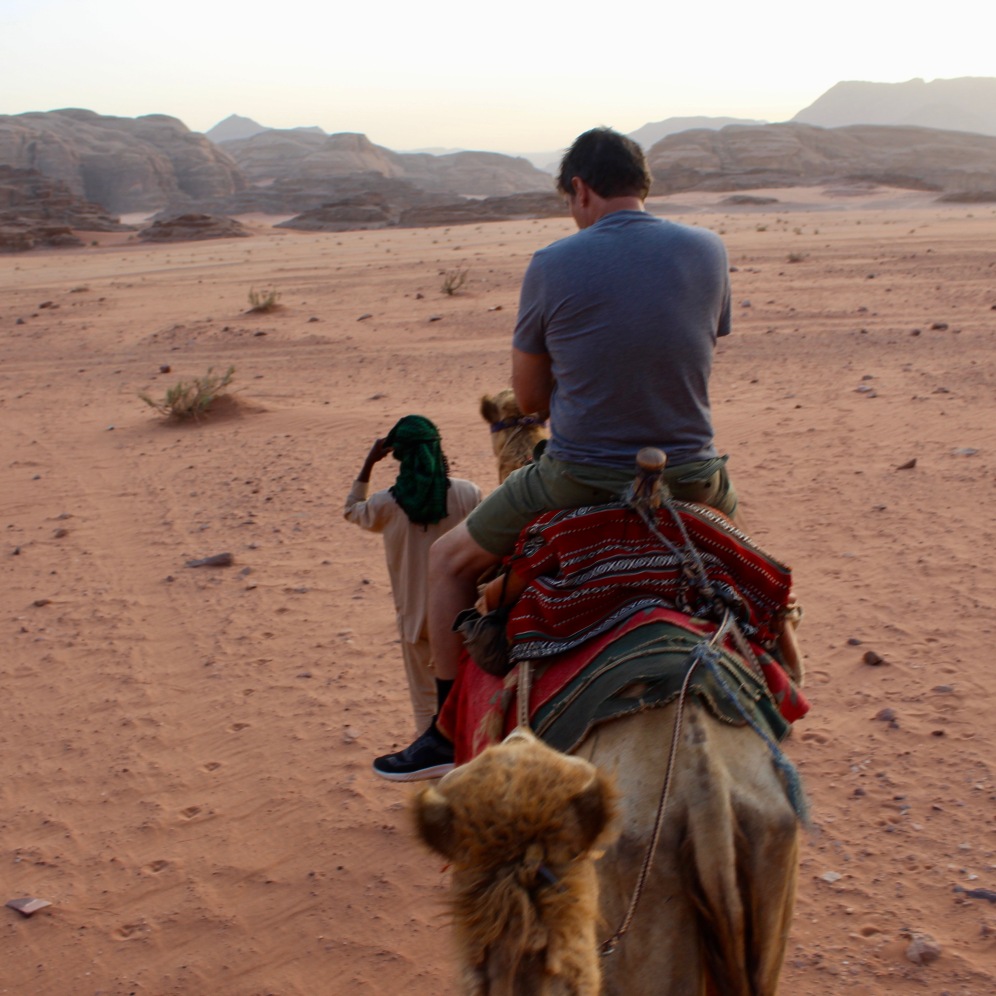 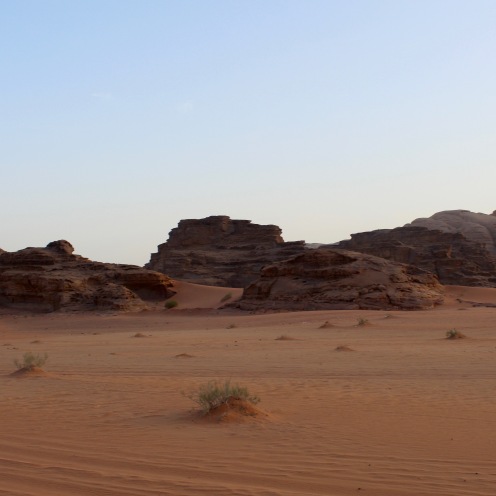 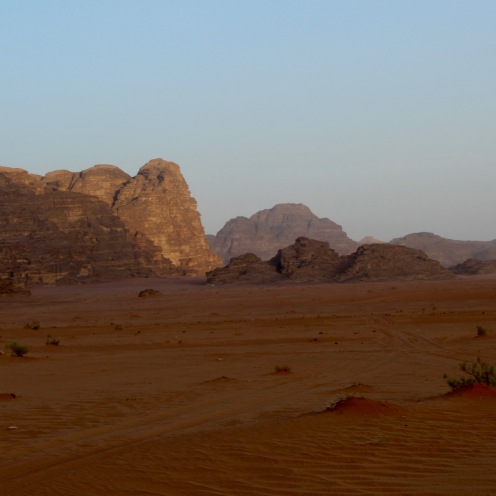 Time to say goodbye to our very quiet guide! 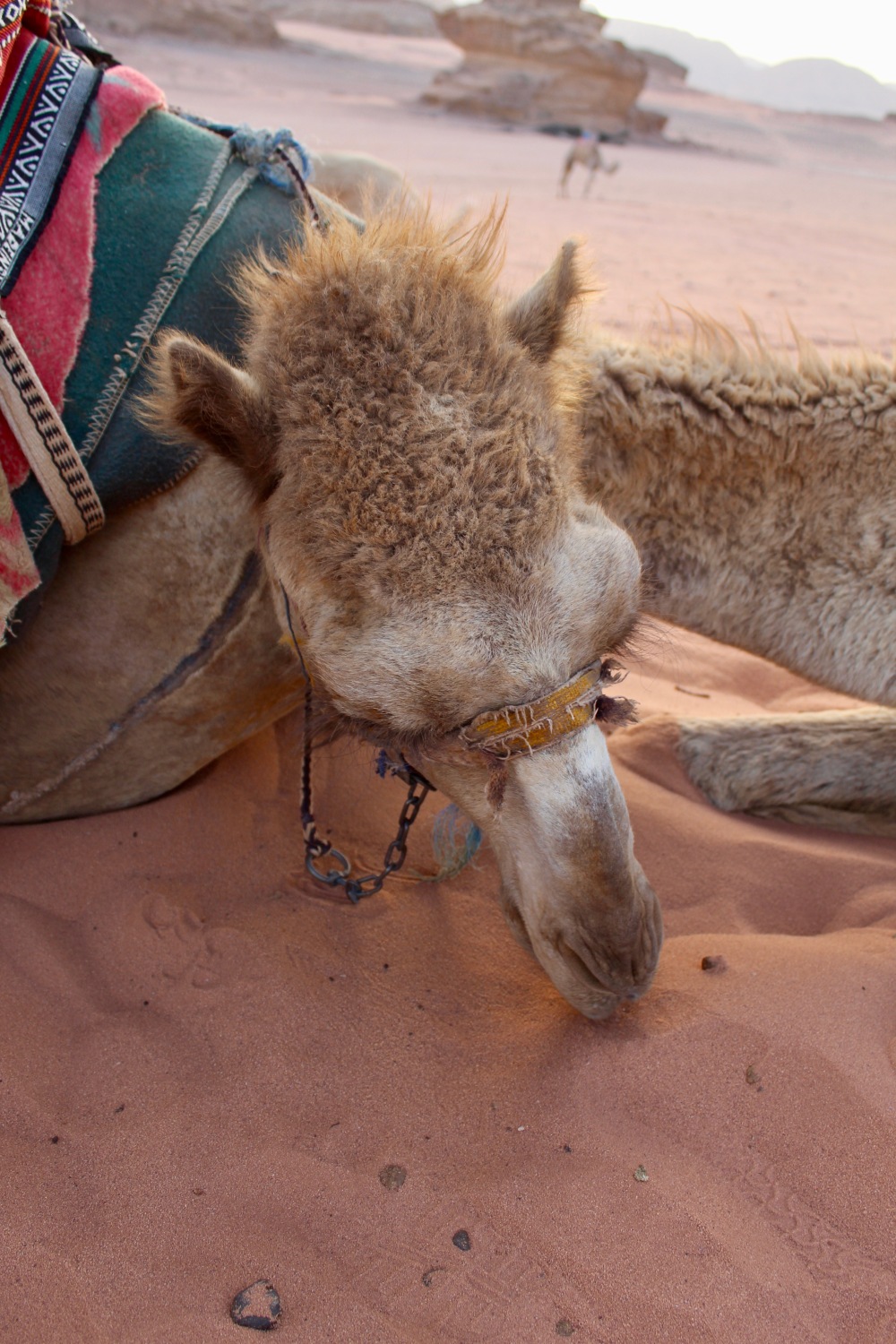 This camel was left behind at the start of the tour. Now that our tour was over, he was rejoined to the caravan; then the guide and camel caravan started walking into the desert… 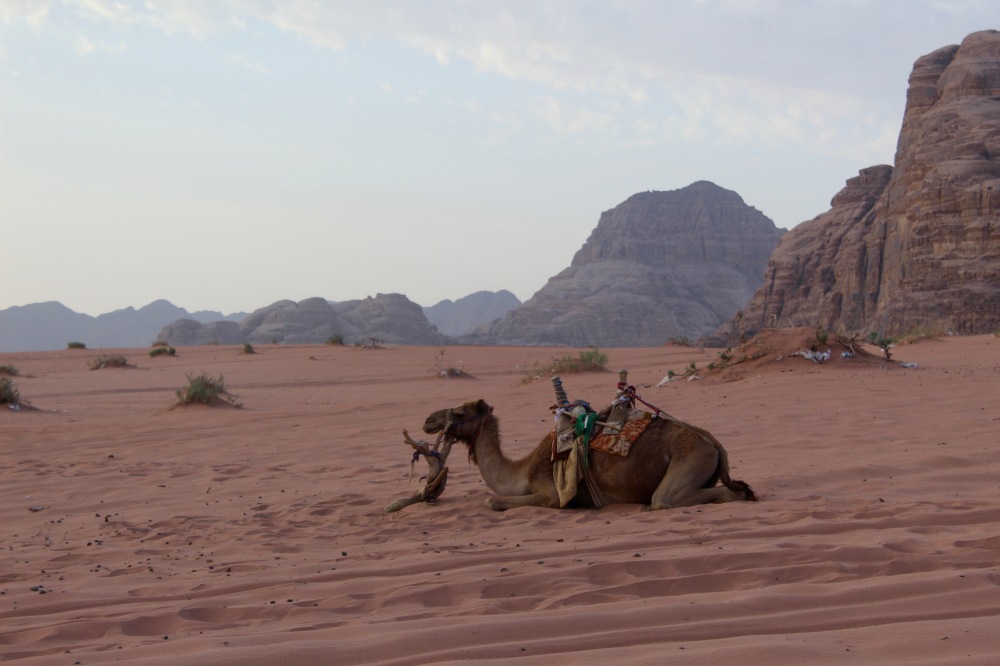 Michael and I are greeted by one of the camps dogs! 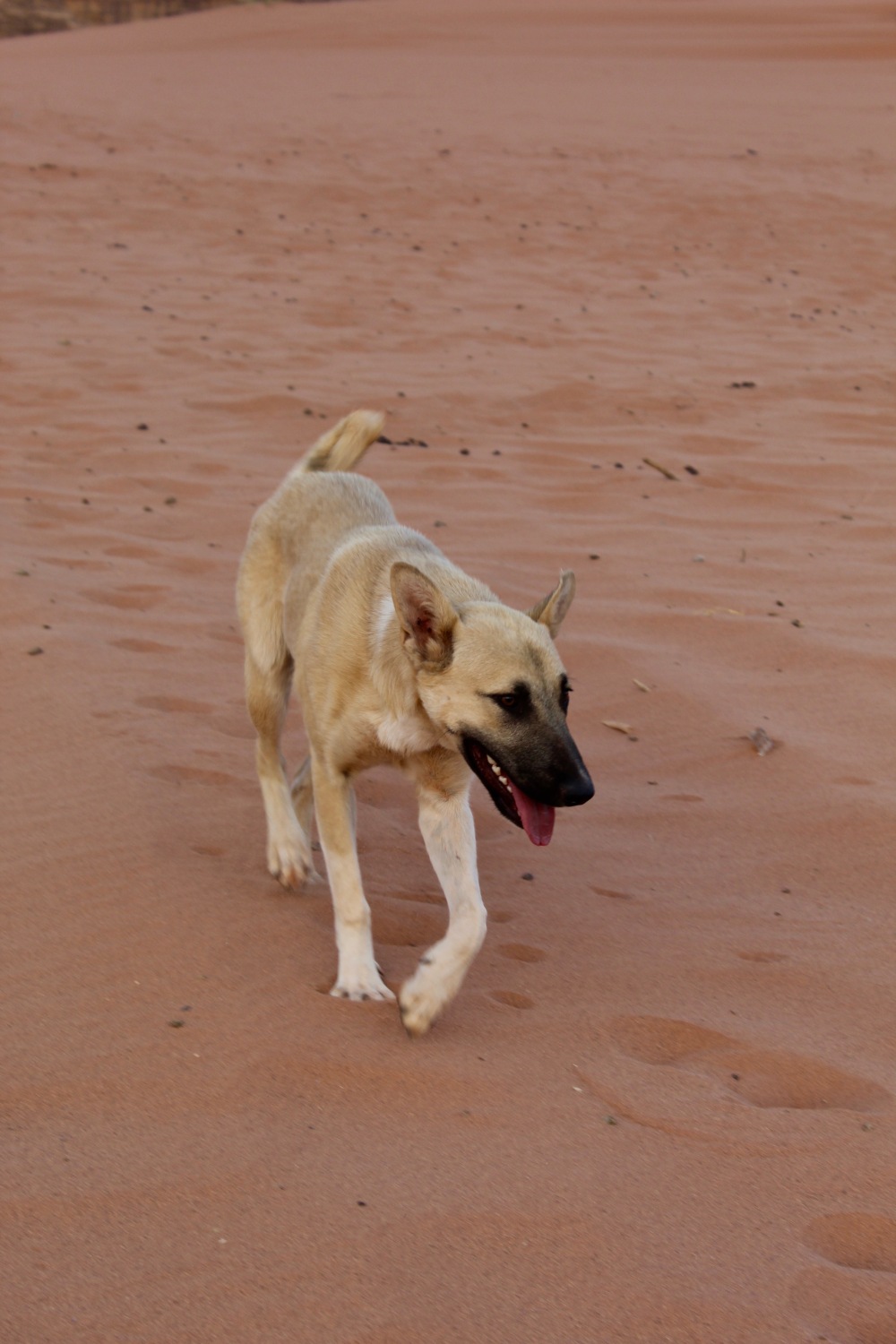 What little time I had on the camel I enjoyed. The sunrise was beautiful.  It sucked being surrounded by so many other tourists though, and I had to change my mind set that they too were there for the same experience. But, I wonder if they too were disappointed like me – expecting a long camel ride to watch the sun rise but ended up sitting on a rock?

It was time to head to the dining hall for breakfast!  🙂