This was THE tour, THE day in Jordan I had been waiting for!

Since 1977, when I was eight years old, I became an original fan of Harrison Ford and Star Wars. Han Solo was always my favorite over Luke Skywalker… I prefer bad boys!  😉

In 1981, I naturally and enthusiastically became an Indiana Jones fan, in awe of all the exotic locations this sexy archeologist travelled to! Since 1989, after watching Indiana Jones and the Last Crusade, I’ve wanted to visit Al-Khazneh. Al-Khazneh is more commonly known as “The Treasury” because of the local Bedouins belief that a pharaoh’s treasure was hidden in the urn at the top of the temple.

I’ll break this tour into multiple blogs because there were so many special moments that deserve individual attention!

But let me start at the beginning!

Your first point of entry to get to the ancient city of Petra is through this gate to the Visitor Centre, located in the town of Wadi Musa. Here is where you buy your tickets, book a guide, buy souvenirs or eat at a restaurant.

The below picture (taken on the way to our hotel) is a view of the Visitor Centre (on the right) in Wadi Musa. If you look closely and follow the same color of terrain the Visitor Centre is on, you see the narrow dirt path that eventually takes you to the Siq – the entrance/start of the main trail that is a narrow gorge through the first pinkish rock formation.

Here, in this picture I’ve circled the pathway and the Siq!

While our driver Walid purchased our tickets and arranged our guide, we waited in the courtyard of the centre.  It was already very hot, even puppies didn’t have much morning energy! 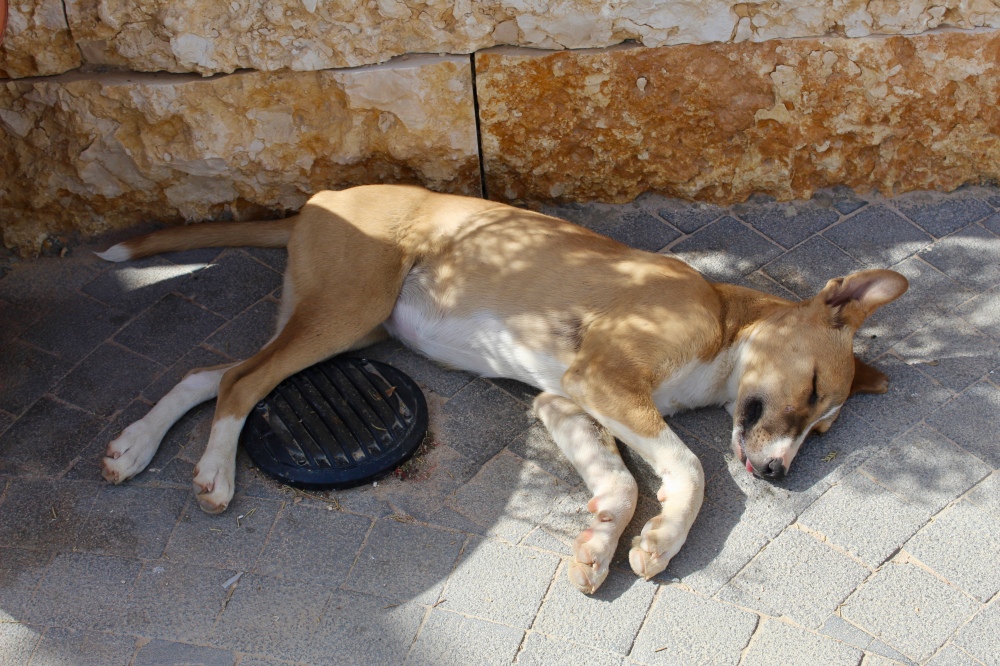 We met our guide, whose name I can’t remember. This guide told us he was Matt Damon’s guide of Petra, when the Hollywood star was in Jordan on location in Wadi Rum filming “The Martian.”

It was VERY difficult watching how locals treated the horses – whipping them forward in the extreme heat to transport lazy tourists. At one point a carriage was taking a family from the Treasury back to the Visitor Centre and the horse wouldn’t move and was frothing at the mouth. I lost my temper and yelled harshly at the driver, to the shock of the Asian family inside the carriage – that maybe the horse would cooperate if he gave the horse a break and some water!  Yes, the horses, camels and donkeys were in much better condition than most of the horses, camels and donkeys were at the Giza Pyramids – but Michael and I both agreed that this time we would not support this exploitation of animals.

I admit as we stared the tour, I did not know any history of the city – my entire reason for being there was to see the Treasury. Our guide started explaining what we were seeing as we walked, but my attention span was – lets keep moving forward to the Treasury please!

Now, as I write this blog, I can take the time to reflect on what we experienced.  I honestly can’t really remember most of what our guide told us, as it was difficult to understand what he was trying to say. His English was good – but his explanations abrupt as he moved quickly to try and include everything he was scheduled to show us within the 2.5 hour tour.

Thankfully, I still have the ancient city map with its detailed explanation of sites along the main trail!  Therefore, I can share in detail what we learned along the way!

*Italicized writing is information provided from the ancient city map.

Petra – Capital of the Nabataeans

“More than two thousand years ago, Petra was built by the Nabataeans (Arab people who inhabited northern Arabia and the Southern Levant) in the heart of the Shara Mountains. It prospered in the first centuries BC and AD and was a vital part of a major trading route connecting ancient Mesopotamia and Egypt. Today’s intricate facades sculpted into the sandstone cliffs of the area can still be seen, along with other remarkably preserved structure and monuments of this fascinating civilization.”

The tour starts with tombs along the path that leads to the entrance to the Siq.

“Bab Al Siq is Arabic for gateway to the “Siq”. Here you will see three massive Djinn blocks, which are squared monuments.”

Our guide explained that these three square formations are family tombs – also known as Djinn Blocks. Take note of the carved, long triangle shape to the left of the door. This obelisk indicates that one person was buried here. 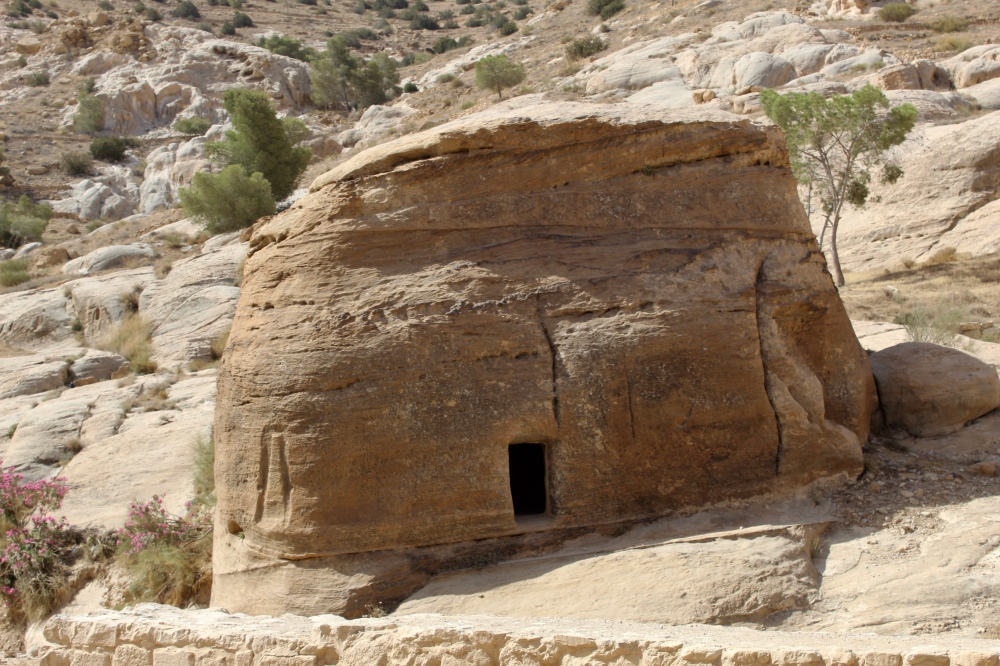 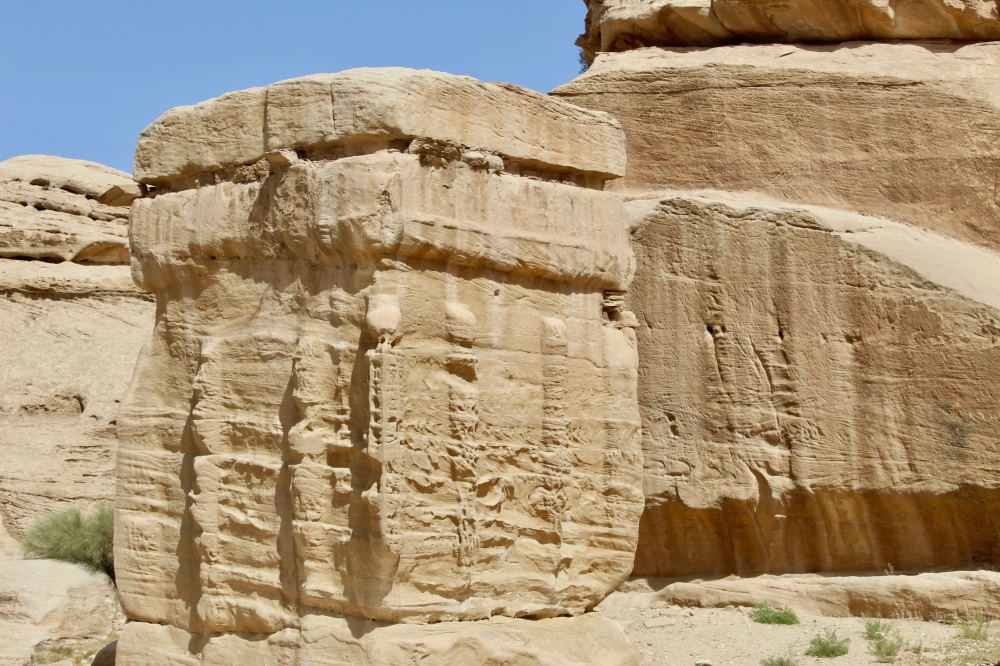 “You will then come across the Obelisk Tomb, carved by the Nabataeans in the 1st century AD. Above the tomb are four pyramids (‘nafesh’) and a niche with a statue in bas-relief that symbolizes the five people buried there. Below is the Triclinium, a banqueting hall.” 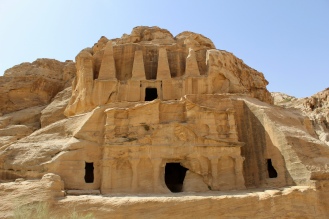 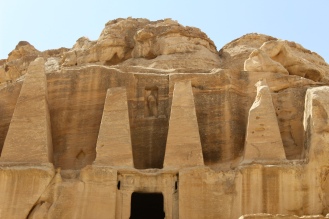 “On the opposing cliff face there is a double inscription in Nabataean and Greek that refers to a burial monument. Written by “Abdomanchos”, it indicates that the tomb was to be used for himself and his family, probably in the reign of Malichus II (40-70 AD).”

“This narrow gorge leads visitors into Petra. The Siq resulted from a natural splitting of the mountain and is 1.2 km long. A triumphal arch once spanned the entrance to it. Two water channels run along both rock sides. As well as presenting a dramatic entryway into Petra, the Siq also holds many relics from Petra’s past, including a paved road, Sabinos Alexandra Station, and Nabataean baetyls (sacred stones).”

This is start of the Siq.

Here is where the triumphal arch was at the entrance. You can see a very small bit of its remains on the left side of the gorge.  I know what I’m looking at – it might not be easy to see – it is two visible stone bricks…

Close up of the arch on the left side of the gorge with a niche just below it. 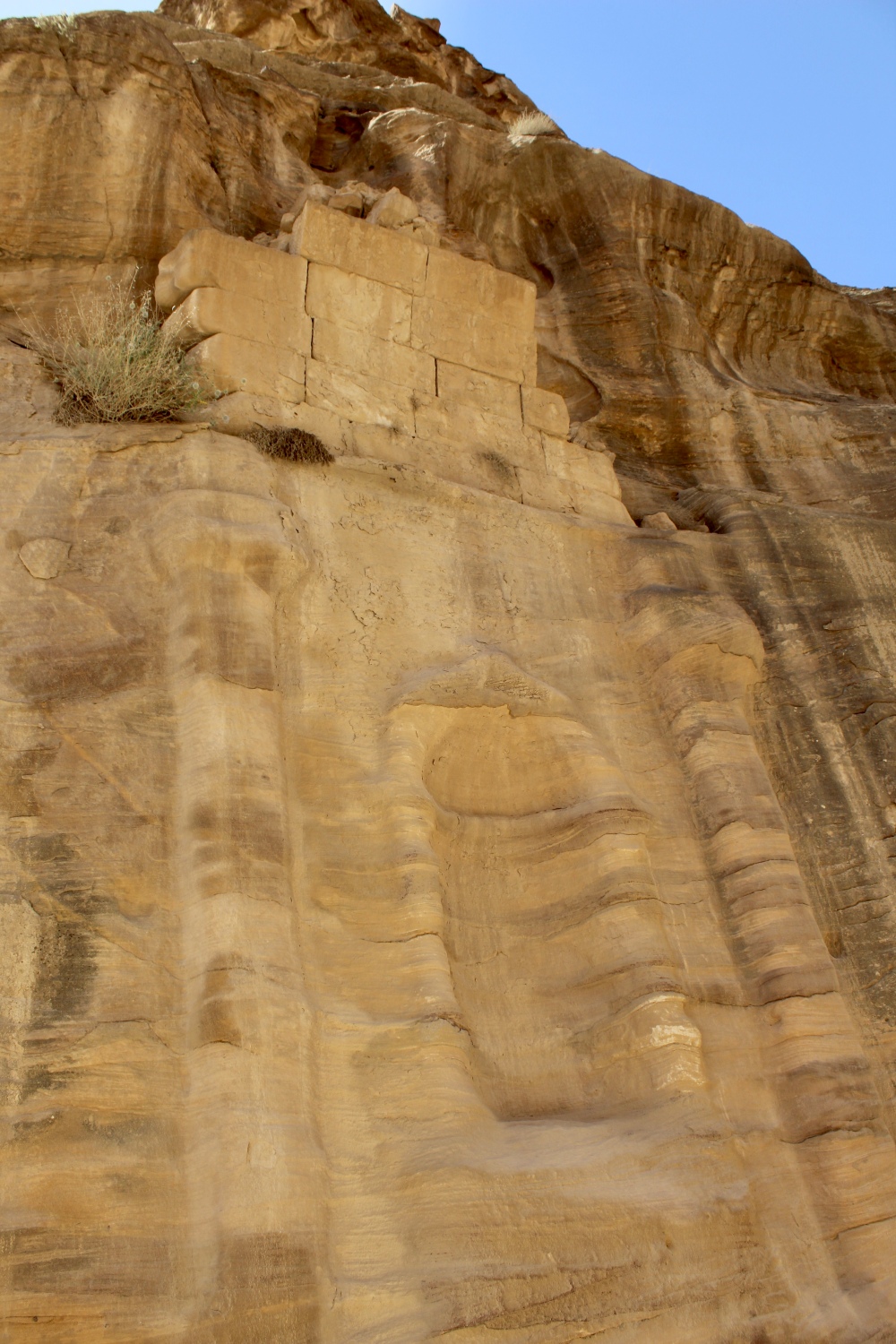 If I remember correctly what our guide told us, these niches held statues of their gods?  I admit, because of the niches Romans built in Jerash to be used as street lights, I wonder if that is what these niches were used for?

Close up of the niche under the archway on the right side of the gorge.

A water channel. Wadi Shab in Oman had these too! 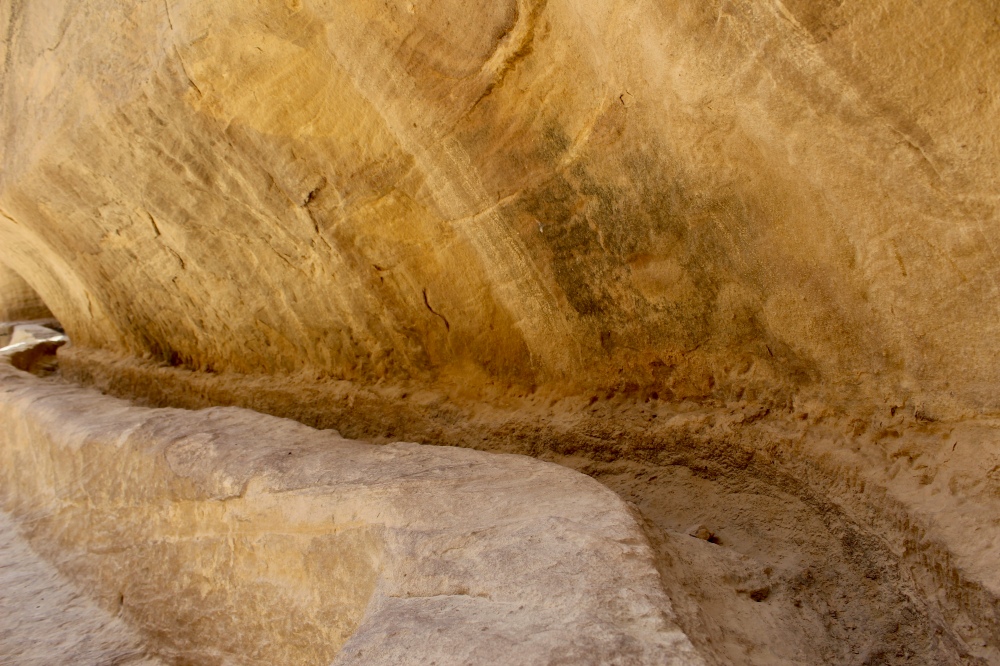 Further in.. Our guide is the man wearing the white shirt, blue jeans and hat!  He didn’t wait for me while I took pictures!!  LOL!! 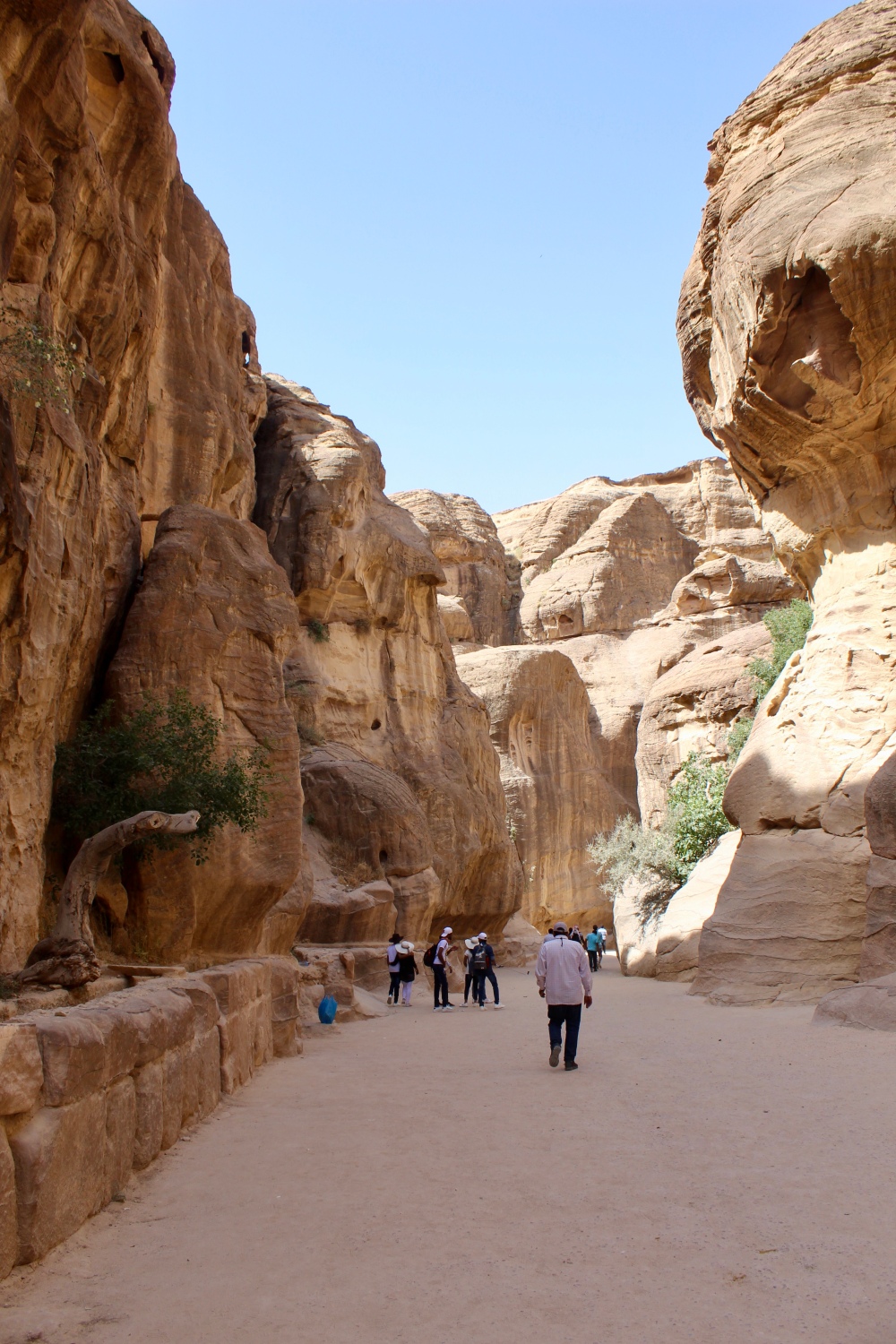 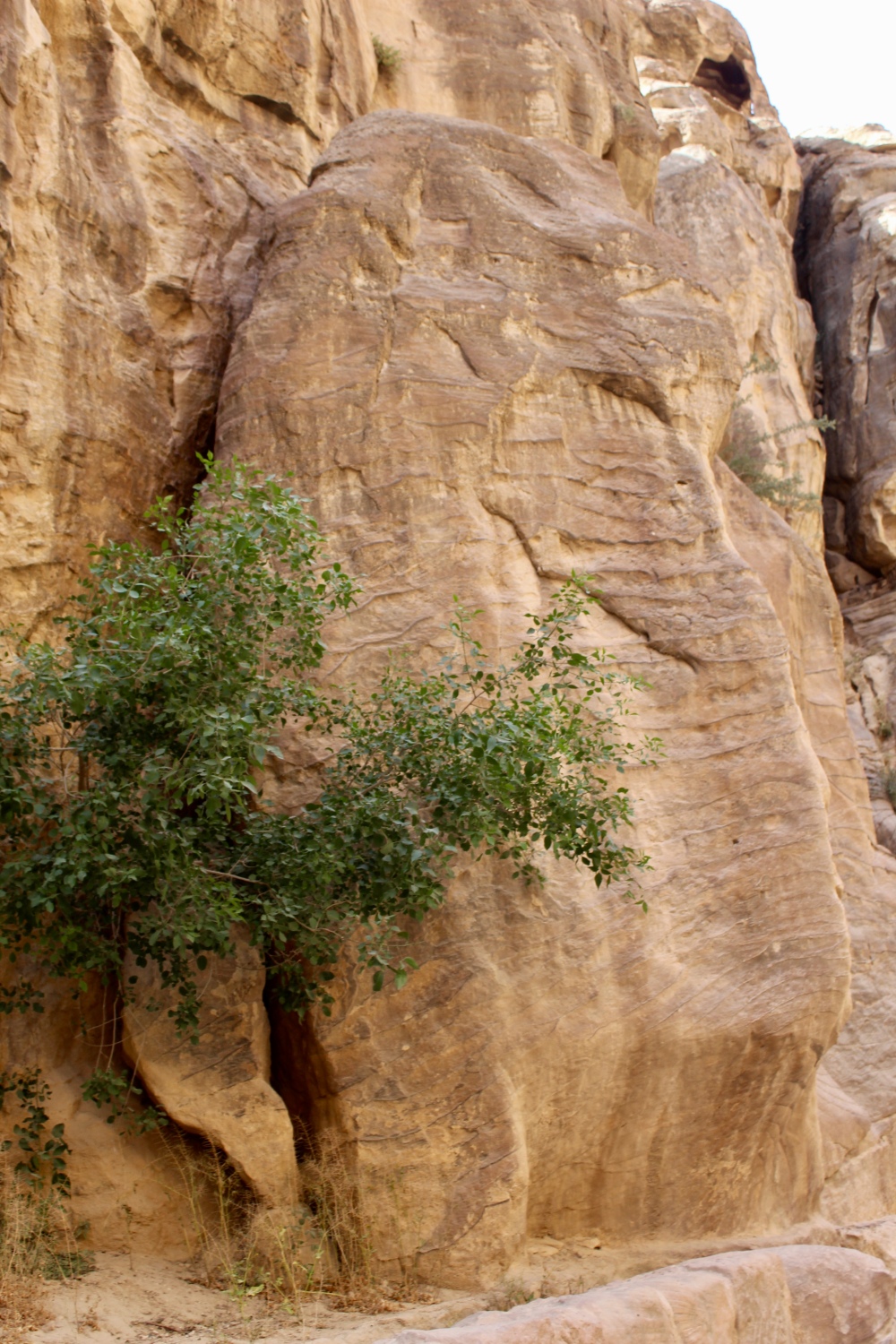 This picture is a hint of my next blog….a very special moment for me… 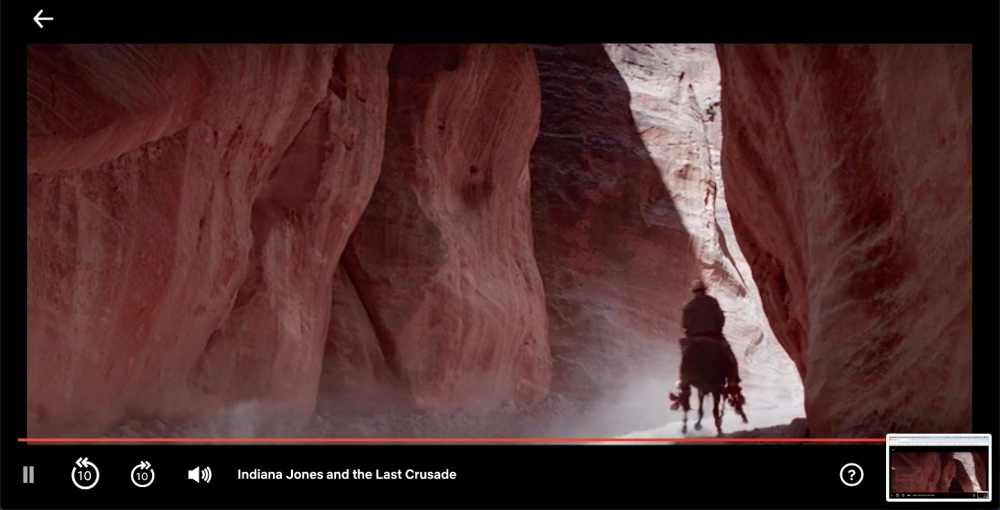