I call this blog our Bollywood movie because our backstreet dealings with notaries in the Municipal Rest House in the city of Alappuzha sure felt like one!  It had all the drama ingredients to make a Masala, a Bollywood movie. All that was missing was a song-and-dance number!  The mixed spice ingredients that made our movie was intrigue, interesting characters, foreigners who didn’t speak the language, “rich” western foreigners vs “poor” government workers, moments of comedy, and finally let’s not forget corruption! I’ll add a small romance just for the fun!

Get your popcorn and enjoy this classic new release……

Our movie begins with the main protagonists, Michael and Stephanie (who are Canadians on holiday in India), in need of a notary. Michael’s extensive internet search indicates MANY notaries in Alappuzha, but very little success in trying to contact one by Skype. FINALLY, he was able to get through to one agency! We then started the forty minute scooter ride from our homestay in the village of Mararikkulam North, along Highway 66, that brought us to the big/small city!

With the help of Google Maps, Michael and I found our way into the crowded heart of Alappuzha, to a side street and an office on a second floor of a decrepit building across from this decorative temple:

I happily checked out the temple while Michael took care of business!

I noticed that soon after Michael entered the old building across the street, he was lead out and pointed to another shop down the road.

Here we go….let the adventure begin!

At the second shop down the road, Michael was again led out and this time we were walked down the street, across another to an area that was the “notary district.” Now look at the picture below. We walked in from the far left of the picture, through an opening within the building that was the entrance to the parking lot you see.

Next picture – The guy in the orange shirt was just standing there when we entered the area and approached us, speaking English. He walked Michael here, where he translated to the woman who is holding papers with one hand, her other arm extended, because she didn’t speak or understand English. For the sake of this movie, this woman needs a name as she becomes a main character.  I’ll call her Banhi, because this woman was certainly full of fire! 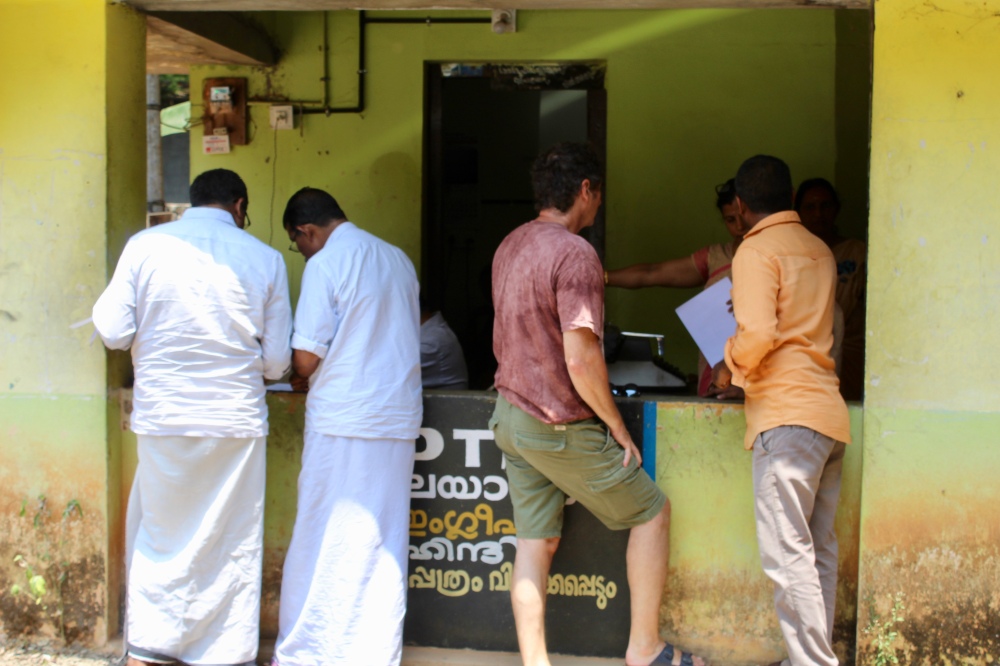 I took a seat in the shade, as it was insanely hot this day, and watched the drama unfold before me.

I could hear Michael trying to make sure the guy in the orange shirt understood exactly what it was we needed done.  Next, Banhi took Michael’s papers and walked away! Michael stood around, waiting, wondering what was happening???  He soon discovered Banhi had started retyping his documents.  The documents he had already prepared!

Nice orange shirt man soon said his goodbyes as his purpose for being there was complete.

It was unclear to Michael and I what would happen next or even who the notaries were? Were they the people sitting in the outdoor hallways, typing documents?

Meanwhile, I watched this woman go back and forth from her desk in the outdoor hallway.

Michael and I were both dripping in sweat while waiting for the retyped documents on official papers. Banhi, who took the documents, appeared again but without documents. She led us to an office along the outdoor hallway, and offered us a seat in one. She switched on the fan for us to cool off while we waited.

Our waiting area inside the small office:

Michael and I concluded that the notaries were just too hot in their offices and did their work in the outdoor hallways?

We couldn’t have been more wrong!

Banhi, with out retyped documents on official papers, indicated that Michael now owed 1000 INR.  He paid Banhi. Next, she led us to a second floor office. Look at picture below. See that one window in a room over the scooters.  We were brought there, to that room.

Here, we met a notary!  Here we discovered that the typists are just that – typists who prepare the documents for the notaries to sign.  So, the office we were sitting in belonged to a notary who just wasn’t there.

This second-floor notary reviewed our retyped, official documents and would not sign them as we are Canadian citizens on vacation in India. We needed to go to the Canadian Embassy in India to have the documents signed.

Our question was why did we even get this far, waste our time and pay 1000 INR for nothing?

The notary started to sing another tune.  If we were able to find out if his signature would be accepted by the Canadian government, he would sign it.

This notary and Banhi started a heated debate, that we had no idea what was said – but could tell they were NOT in agreement.

Banhi lead us out of the office.

And brought us downstairs to a different office, to another notary.

Everything clicked into place for what was about to happen. If one notary wouldn’t sign, let’s try another.

Notary #2 is the main antagonist of this movie.

Let’s call him Ramesh.  Ramesh is one of the names of Lord Vishnu, Ramesh means “the one who saves others from problems,” I would also add – “saves others for a price”, but that comes later in the movie!  😉

Let me introduce you to Ramesh: 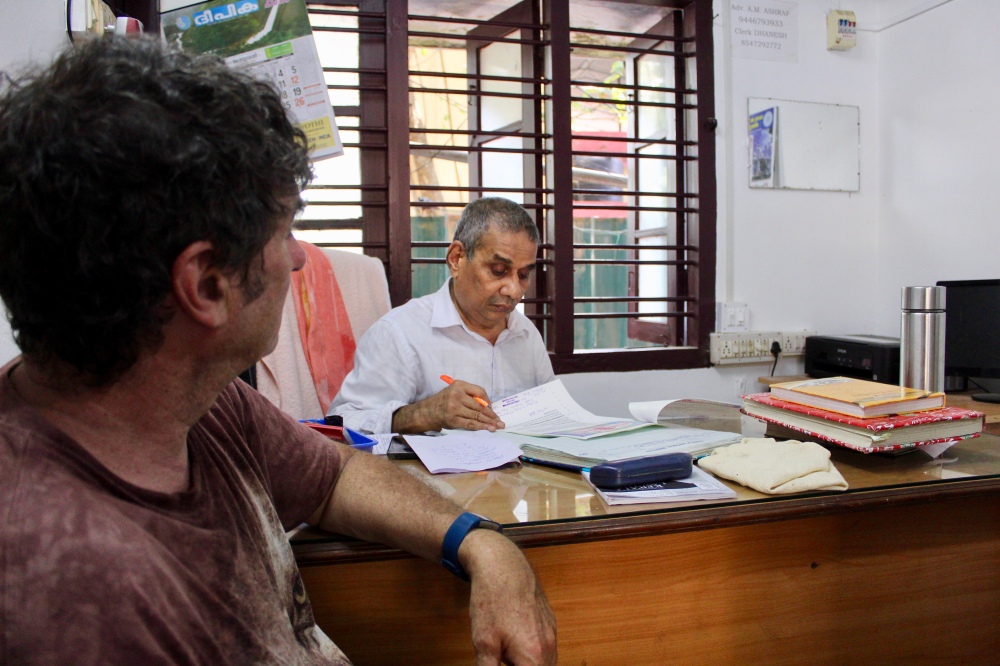 Ramesh was a popular notary this day.

First, there was Michael and I in his office. Then a father and son walked in past us, meaning butted in line, and sat along the right side of his desk.

Next, another man came in, and stood at the doorway.

Everyone wanted Ramesh’s signature!  Seems because he was the notary willing to give it!

When Banhi brought Michael and I to Ramesh’s office they immediately launched into an animated conversation.  I observed her facial and body language, and his.  Her eyes sparkled and so did his as they spoke (here is the romance!).  It looked as if Banhi had an affection for the older notary.  The older notary seemed to have a soft spot for the pretty typist.

Banhi handed Ramesh our document and he started looking it over when she left his office.  This is when the others started coming in and Ramesh was handed other documents to sign.  He would be mid-looking through our document when someone else would drop another document on his desk.  He would stop looking at our document and start signing their document.  Michael and I became irritated by this, because we still didn’t know if he would sign our document or not.  However, we appeared to be with the right notary as he was signing everything put in front of him!

I don’t understand or speak a word of Malayalam. But I can read body language and interpret tone of voice.

Banhi came back in, and started laughing with Ramesh as he, once again started rereading our document.  They bantered back and forth with laughter.  Another person walked in.  Ramesh put our document aside, again. Michael picked up our document off his desk to take a look at it, and noticed a spelling error. We found two spelling errors and showed it to Banhi, while Ramesh signed another document. This new person in the office could speak English and laughed when we pointed out the spelling errors on our document, saying these errors are common!  Ramesh handed this man his signed document and started looking at ours again.  This time, I could tell he was going to sign it because I watched Banhi’s movements that communicated she had to retype before he signed.

Michael went with Banhi when she went to have the retype done.

I was then alone with Ramesh as he tidied up after his rush of documents.

Most, MOST of the documents Ramesh signed were logged into a ledger book.  Others, he stamped, signed, took a handful of cash and put the money in a drawer. One situation specifically was with the father and son who butted in line before Michael and I. The father spoke pleadingly to Ramesh to sign the photocopied papers his son placed before him.  Ramesh stamped and signed, took the cash, and did not fill out the ledger book.

Fair enough, one has to make a living.

It was when it was just Ramesh and I that he stood to show me his arm.  He had a stroke four years ago and lost the use of his arm. It happened in the hospital as a result of a doctor’s error.  The doctors cut off blood flow to his brain for 7 minutes.  He also lost 20,000 brain cells per minute!!

I sat and listened.  I emphasized.  I used humor.  He laughed.  I started thinking to myself, what the hell, let’s give this guy 500 INR for being such a good sport.

Banhi and Michael returned with our revised document and Ramesh signed it.  Another typist had entered the room, for whatever reason, and was just standing there, watching us. We needed a witness to sign the document other than me, so we asked her to sign as a witness.  She didn’t want to, but Ramesh told her to. Finally, FINALLY, everything was done!

It was here that I whispered to Michael I wanted to give Ramesh 500 IND, and to just play along.

Michael agreed, but didn’t have change.  He needed to get a 2000 INR bill broken down to smaller bills.

Now, while Michael was with Banhi when she revised the document, he paid Banhi for Ramesh signing the document.  When Banhi returned to the office she gave Ramesh the breakdown of what Michael paid – so Ramesh knew we’d already paid for his signature.

When all was said and done, Michael and I were waiting for Banhi and the other typist to leave the room, so we could slip Ramesh the 500 INR in private, and with humor.

But the women wouldn’t leave, and there was a lot of conversation happening between them and Ramesh.

Michael tried to clarify that Ramesh knew we paid for his fees.  He then opened the ledger book and stared filling out our payment breakdown that Banhi had given him. He then requested a photocopy of our document.  Banhi did that.

When Banhi returned with the photocopy and the ledger was filled out, Banhi, Ramesh and the other typist started talking again.  Looks like Michael and I wouldn’t have a window to give Ramesh the money.

Michael and I almost burst out laughing.

The typist who signed as a witness, blurted out “100 dollars!”

With signed document in hand, we gave Ramesh, “the one who saves others from problems”  his 500 INR, and left.