Dachi, my awesome tour guide told me that the Svetitskhoveli Cathedral is the most holy of churches in Georgia – here is where the robe Jesus wore during or shortly after his crucifixion and members of the original Royal Family are buried.

The Svetitskhoveli Cathedral is a UNESCO World Heritage Site.  Anything that is restored in or around the church has to be made to look new – it cannot be made to look old.

Walking to the cathedral, the streets are lined with shops and locals selling souvenirs, food and drink. 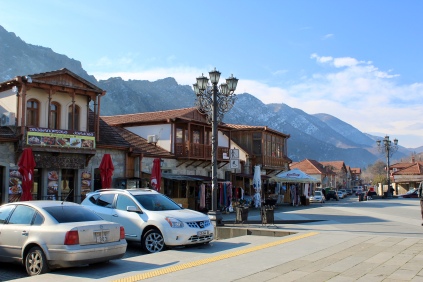 I’m bringing back 4 black papakha hats for Michael’s band members – here is Dachi and I as he tried one on!  What a cutie!  He sorta looks like Orlando Bloom in this picture! Yes, ladies….it’s been a difficult week spending my days with this young man…. hee hee…..  🙂

There is a cross on this mountain – overlooking the city…Dachi explained to me what it meant….I think it was to tell invaders from Asia that this is a Christian area?  I might be wrong….

View of the cathedral from the street: 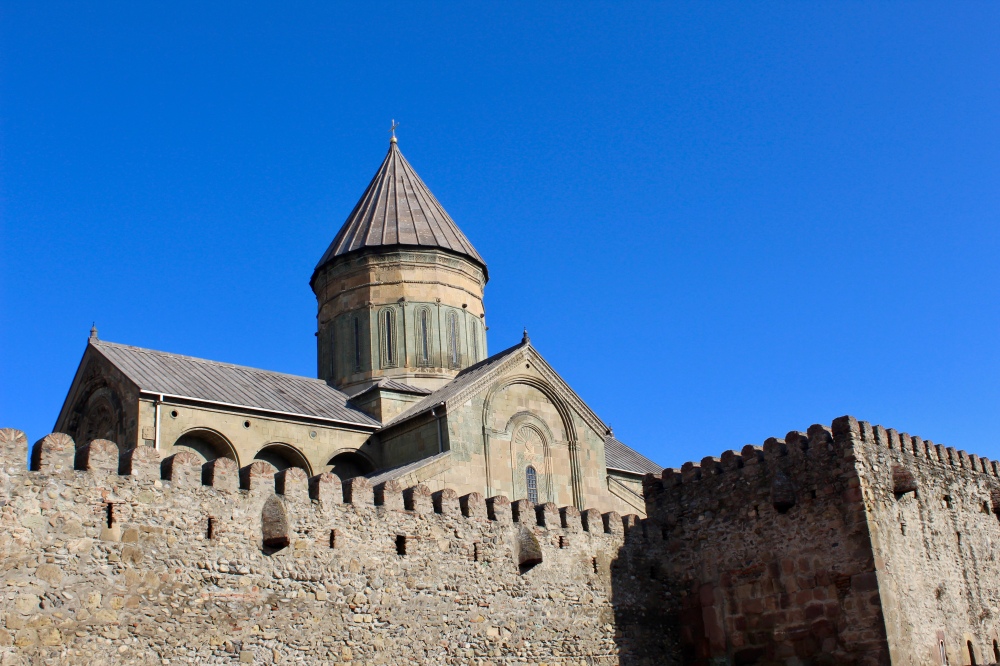 Walking around the side of the cathedral:

The angel on the left bottom corner of the window, and the first Saint of the three is Saint Nina. The oxen heads are a representation of strength. 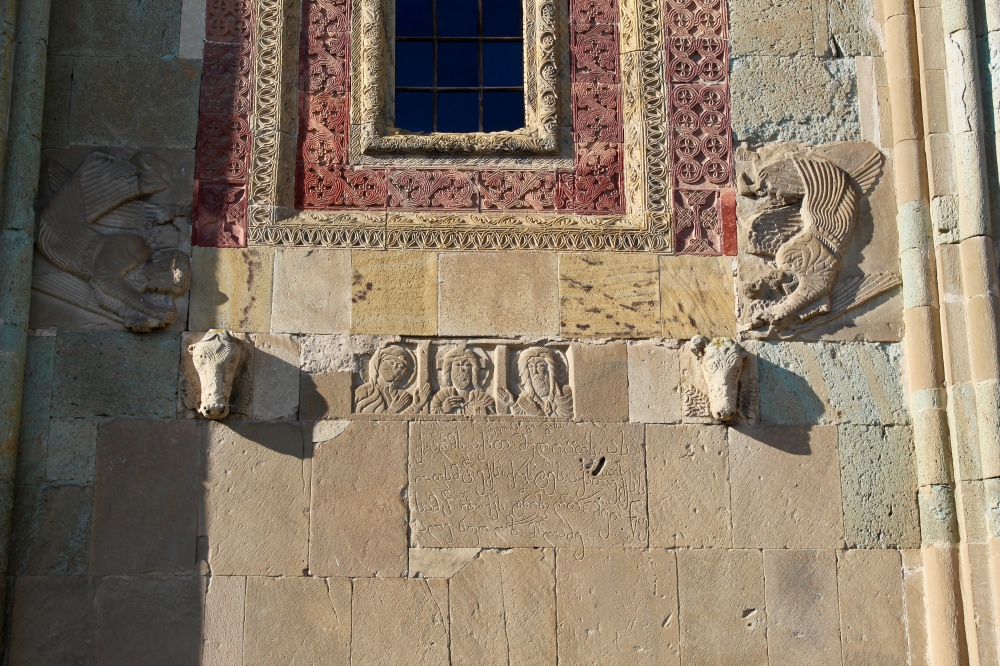 This is the new building where the priests live: 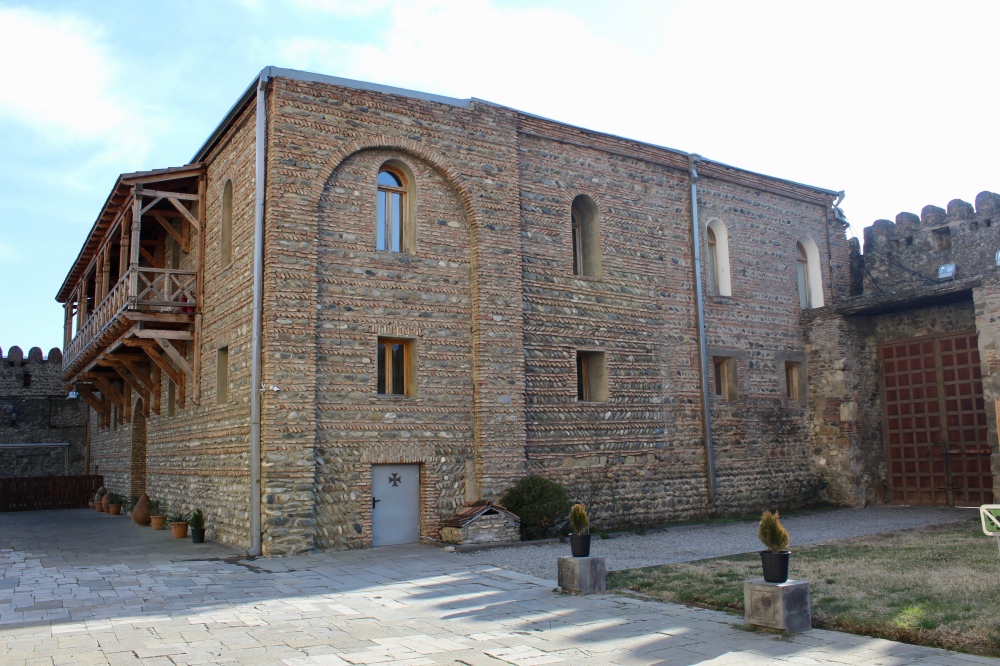 Along the stone wall:

The other side of the cathedral. Story has it that the architect hired by the king to design the church, fell in love with the queen.  She returned his feelings.  The king – looking for a way to revenge this, cut the right hand of the architect off.  There is a show of this displayed on the church!  It’s the hand holding what looks to be a hammer….!!! 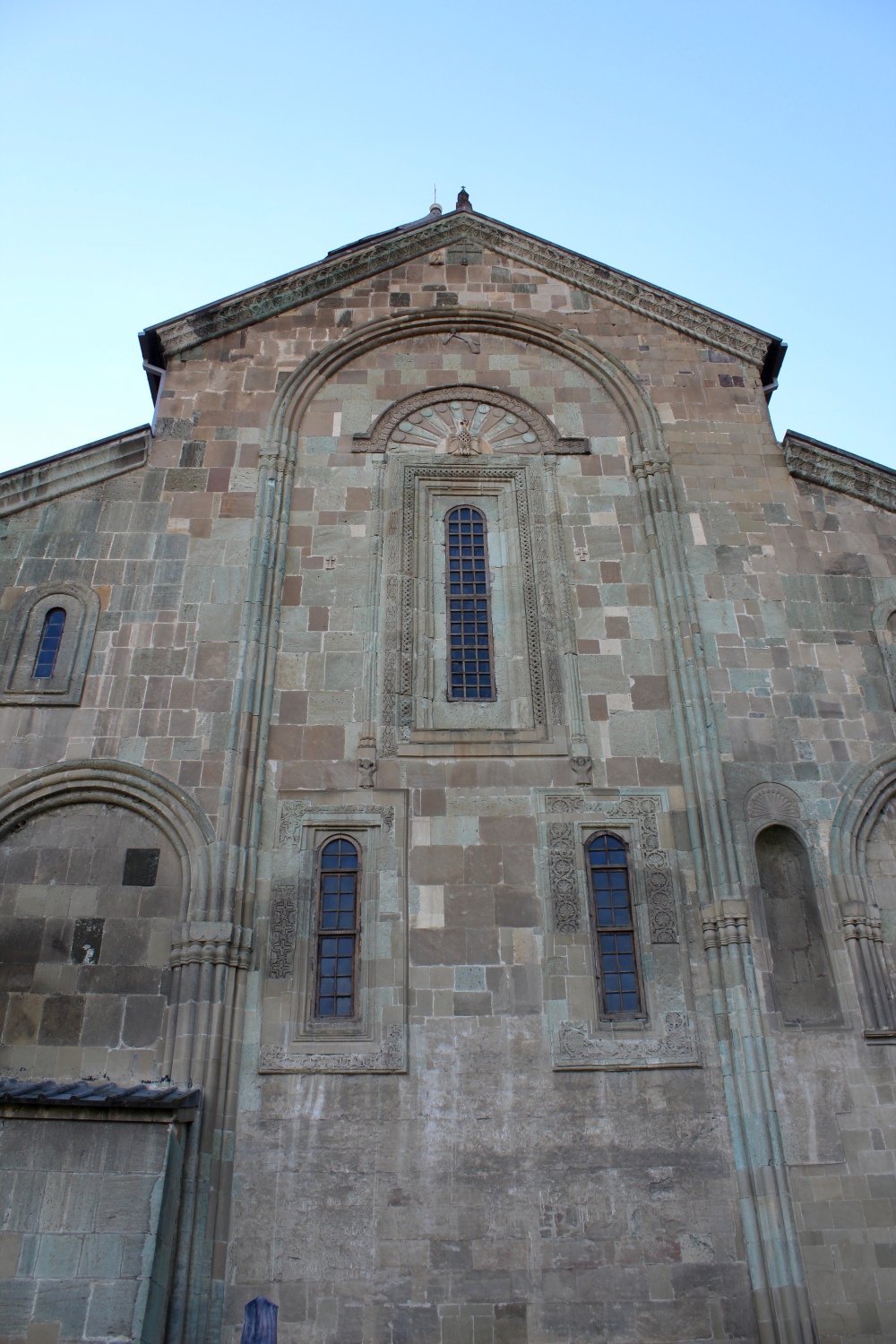 Along the interior front wall of the cathedral.  Here you see the newly renovated door – made to look new and the large clay pots that once were underground and held wine. 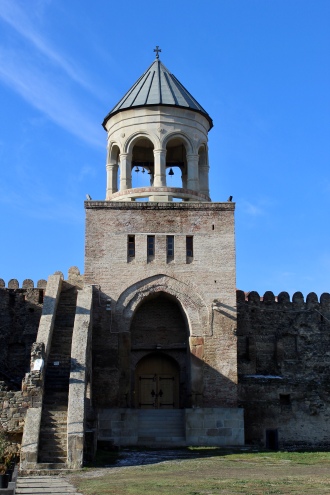 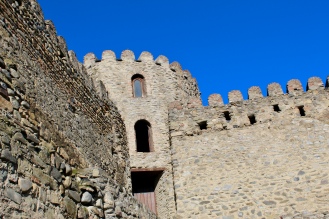 View of the cathedral with the Jvari Monastery in the background!

Entering the church. Again, I had to cover my hair, wear a wrap around my pants (women are not to wear pants in the church) and wasn’t allowed to take pictures inside the church.  There were people sneaking pictures, but Dachi and I both agreed to respect the rules.  And he would get yelled at by the priest who was walking around, keeping an eye on everyone!  😉

The interior of the church, with it’s frescoed walls, tombs of kings and area that holds the robe of Jesus felt like I had stepped back in history and is one the most beautiful churches I’ve walked through.

It was time to warm up with fresh bread filled with cheese, still warm from the oven!!!!