We walked along George Street during the day, played some pool at Dooley’s and ate at a few pubs.  The best food and drink during those days, to me was at Yellowbelly Brewery & Public House.  For beer, I tried their Wexford Wheat Ale.  It was nice and light – and yes it did leave me wanting for more!!  Michael enjoyed their YellowBelly Pale Ale and immediately picked up on the grapefruit flavor. For food, I started with their Yellowbelly Pale Ale & Sea Salt mussels. My main was the YellowBelly Burger!!!  This burger was OMGAWD delicious!!!  The burger was topped with caramelized onions, mayo, blue cheese, pulled short rib, and tomato jam!!!  Michael started with a bowl of seafood chowder, his main the St. John’s Stout Braised Short Ribs.  He really enjoyed them both!! 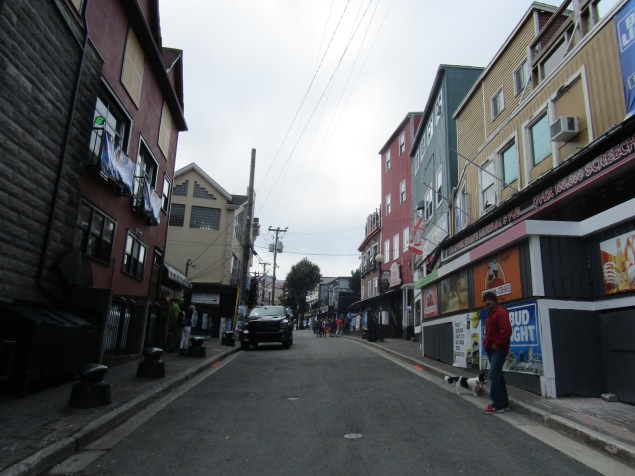 One entrance to George Street

The Cotton Club Strip bar on the corner of George and Queen – in an old church! 😉 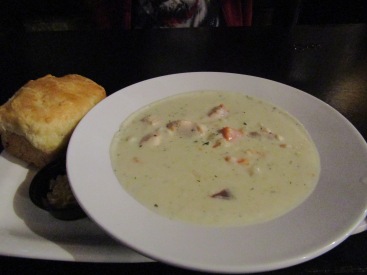 Seafood chowder at The Celtic Hearth on Water Street

Picture on the wall at The Celtic Hearth. Can you spot the UFO and the man on the high wire??

We had the BEST food this day at the YellowBelly Brewery!

We went to the George Street Festival on the final night to see Blue Rodeo.  Our first stop that evening was at O’Reilly’s Irish Bar. There we watched local musician, Derrick Daymond who, between sets, was introduced to us and helped us (mostly Michael!!) to understand how to say, “Yes B’y” and the meaning based on the context/tone.

Here is a wee clip of Derrick Daymond singing the chorus of Black Velvet Band then make a little reference for Michael……..  😉 😉 😉

We then took our drinks to the street and found our place for the evening concert.  With the start of the opening band, Fortunate Ones the crowds increased.  We decided to give up our good positioning near the stage for a bite to eat.  We went to Green Sleeves Pub & Restaurant. I enjoyed a bowl of mussels in a creamy garlic, red pepper and bacon sauce!!! SO good!!!!!

Soon Blue Rodeo took the stage and it was impossible to get near the stage.  So we stood out on the street and watched the concert mainly on a big screen placed atop a bar rooftop for those like us far from centre stage.

We enjoyed our time on George Street….and I would have to say the best concert we watched wasDerrick Daymond singing Black Velvet Band……

Finding our seat for the concert.

Michael finds a seat too!!

I go for a pee in one of the bars…is that beer bucket a barf bucket???? 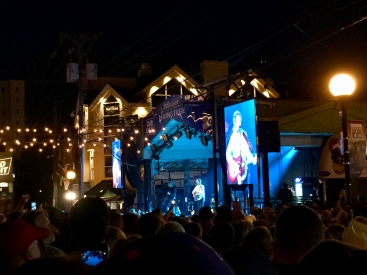