This was a moral dilemma.

Only if the elephants are treated ethically.

Most of the Tripadvisor feedback of elephant safaris in Thailand are of the exploitive, unethical treatment of elephants.

But it seemed Michael and I stumbled on a pretty good place, if our guide “Bob” is any indication.

But I’ve gotten ahead of myself…….

Riding Lulu was an unexpected adventure we stumbled upon as we drove up the six kilometer road along the Nakkerd Hills to visit the Big Buddha. We drove past an assortment of tourist attractions that deeply saddened us.  Mostly the baby elephant we first noticed, short chain around her leg, there for tourists viewing and profit where tourists buy bananas to feed her.

As an employee led us around back, where the elephant stalls were, to wait for our turn, I found myself rationalizing this adventure by comparing this to Hatfield Farms  back home in Halifax where people go on trails rides.  People pay to ride horses along a trail led by a guide.  Same service is being offered here in Phuket, only instead of horses, people are riding elephants led by guides.  But there is always the debate no matter if the animal being ridden is a horse or an elephant, is the animal being treated ethically?

Just like a horseback rider sometimes uses a crop to manage a horse, I noted what the guides were using to manage the elephants.  And just like any tool used for animal management (like a leash for a dog) it is the human using it that matters.  I’ve ridden horses and have had to use a crop at times because the 1,100 pound creature between my legs is a lot bigger than me, has a personality and can be having a bad day!!  I didn’t ever beat the horse or misuse to dominate, I just gave a smack to remind we are a team, and that the horse isn’t running a solo show!  I didn’t see the use of any electrical shock sticks used on the elephants that I’ve read about on Tripadvisor.  What I did see were a few of the guides with pickaroons.  One guide didn’t hold anything, he controlled the elephant with his foot!  Bob, our guided had only a bag of bananas.  He guided her by pulling, not in a mean way, on her ear to tell her what direction to go.

Bob is from Northeastern Thailand, close to Cambodia.  Generations of his family raised elephants.  Elephants are his life.  I expressed my gratitude to Bob that he was kind to Lulu.  Bob (I’m sure his Thai parents, when he first popped into the world did not call him “Bob”!!)  explained that like people, there are nice elephants and not nice elephants and safety is always an issue.  That there has to be some control.  It is HOW that control is imparted.

Bob the guide walking along with Lulu the elephant (holding his bag of bananas) with Michael and I on her back, enjoyed a nice half-hour walk through the jungle as Lulu strolled at a lazy pace while we bribed her with bananas to keep moving forward!!  Michael and I laughed and enjoyed both the company of Bob and Lulu’s lazy personality as we plodded along on her!! 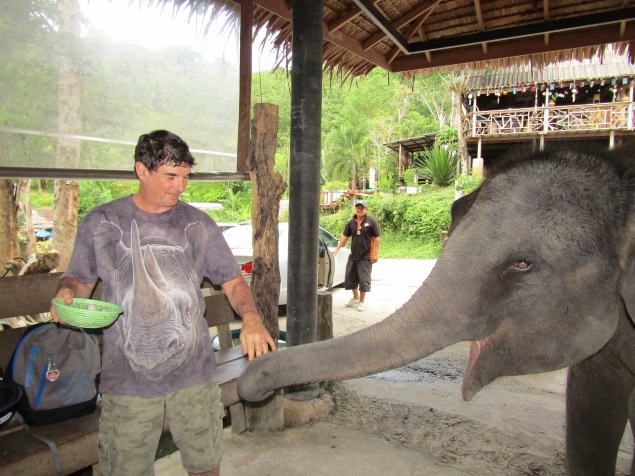 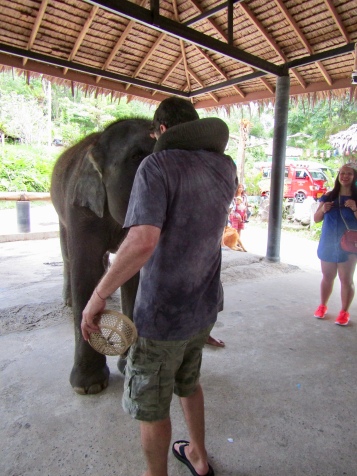 Michael gets a hug!!! 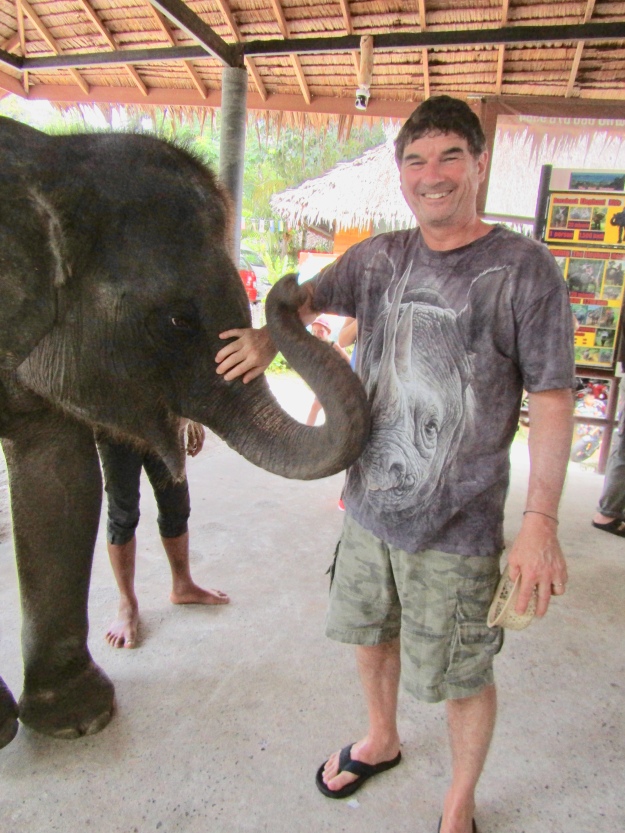 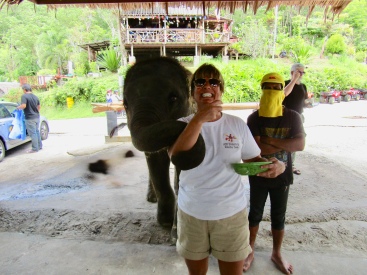 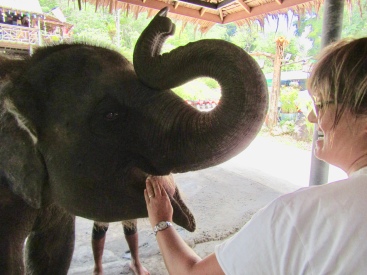 The boy guiding this elephant has to be 10 years old!!!!

A guide taking a nap!!

View from way up on LuLu 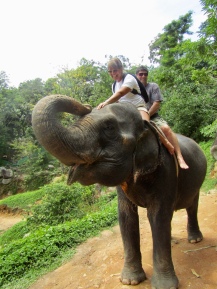 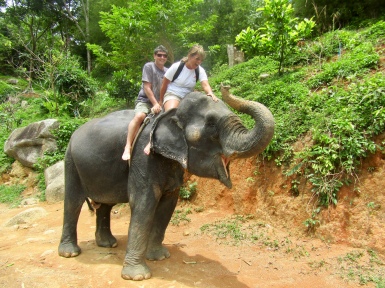