This was an 11 hour layover on our way to Switzerland in what felt like being trapped in constant misery!

The airport was packed….I mean packed………

Add to that, comfort was nonexistent and the only food available was a Tim Hortons – yes, it is true – but not anything typical to the menu was served, and two other cafes with overpriced, terrible snacks!

The only bathroom for women available was used as a public shower as Indian and Arab women lined up at the sinks to either wash their feet, face, underarms and other body parts to either personally clean themselves or ready for prayer. The floor had water flowing everywhere, and the toilets (at least there were toilets rather than the hole to squat!) were soaked with water too!

What few seats to sit on in the terminal that were available were hard, and uncomfortable – with arm rests – so you couldn’t lay out on them to sleep. Michael had NO problem finding a spot on the cold and dirty floor to lay on to sleep. I, on the other hand had my new North Face WHITE jacket on (such a First World problem!!) and refused to do so!  I FINALLY found a TINY piece of wall where I could lean, stretch out my legs, and hopefully fall asleep sitting up to kill the 11 hours ahead….

I FINALLY started to sleep but was rudely awakened as a family pushed themselves in around me…trying to push me out…I refused to move…..

I managed to take two pictures: 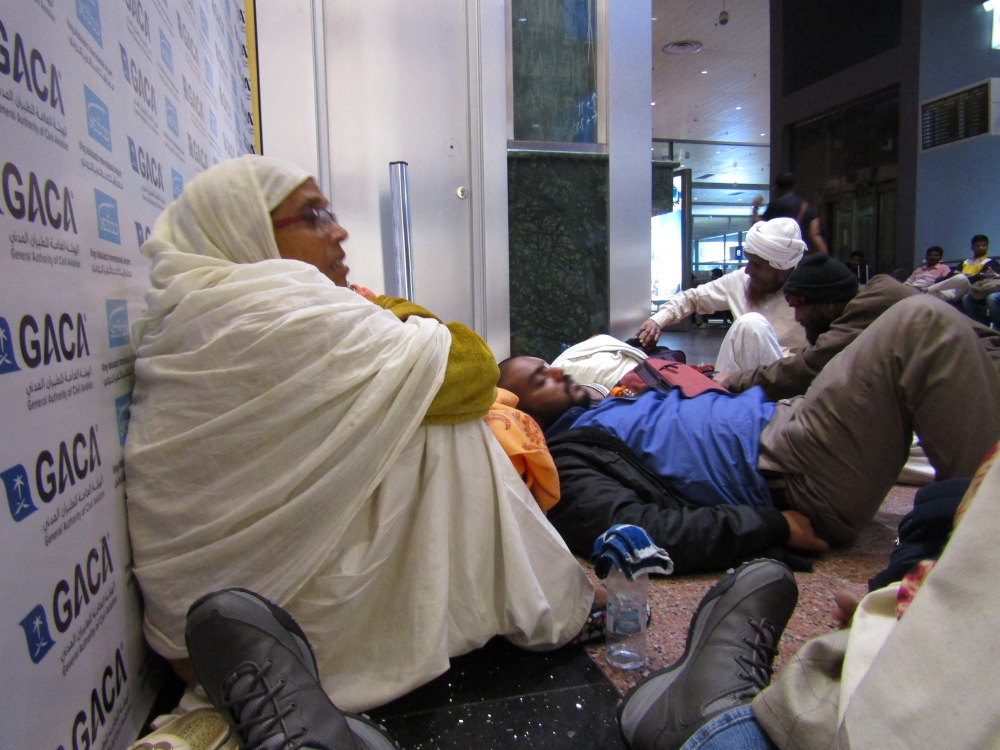 Meanwhile…..in another apart of the terminal, Michael woke from his deep sleep on the floor, wondering where I was. He walked the tiny terminal….not finding me in the crowds of people taking up almost every piece of flooring…..

Then he spotted me….

The woman sitting next to me kept pushing at me…..

When I saw Michael I jumped up, giving her the space and spent the rest of the time either walking laps up and down the wee terminal or sitting in a broken chair…