EVERYTHING IS BETTER IN PARIS!!!!

Well, here I sit with a coffee, back home in the desert where the sounds of the Muezzin’s call to prayer have replaced the sounds of cathedral bells tolling across the heavens of Paris….

I have truly enjoyed looking over our pictures this morning of our stay in Saint-Germain-des-Prés. Saint-Germain-des-Prés, we came to discover, is adjacent to the Latin Quarter, known for its student life, lively atmosphere and bistros!!  During our walks around the 1st, 3rd, 4th, 5th, 6th, 7th and 8th arrondissements, we would stumble, time and time again, into areas of great history.  That is, to me, what makes Paris so interesting is that at every turn there is a building or cafe or monument or museum or shop steeped in history with an interesting story to tell.  NOTHING is boring in Paris!!

I witnessed EVERY cliche I was aware of that was Paris: French people sitting outside at cafes wearing berets and scarves while drinking expresso or wine and smoking, people wearing scarves carrying baguettes, leek leaves sticking out of a designer bag carried by a woman dressed impeccably and wearing a scarf.  Men wearing stylish shoes with jeans and a scarf carrying fresh bouquets of tulips. French people are the epitome of style!!! They can wear a t-shirt and jeans and look right off the fashion runway. And EVERYONE smokes!!  Michael and I wanted to smoke, because the French make it look SO sexy, so appealing!!!  And people kissing!! Sex, love, romance permeates the air.  A woman can’t help but feel sexy in Paris!!!  It’s difficult to explain, but there is something intoxicating about Paris.  Maybe that is why the French are so relaxed is because they drink, smoke and have sex all the time???  Then stop for a cafe vienna later in the day!!!!  Who WOULDN’T be relaxed??????

The food was amazing!!!!!  I’ll let my pictures of the food tell that story!  We purchased a french cookbook with traditional recipes!  I totally want to make a beef stew the french way!!!

Our last morning – we woke to sunshine….and the sound of jazz music filled the apartment when I opened the windows to let some air in. I’ve included a video of the band playing that jazz music. The band, called Les 5 doigts et le Pouge, were in front of Paul restaurant, located just around the corner from us!!!  I bought their CD!!

I’ve posted pictures of our final evening and last day walking around before we left for the airport, as well as a few other random moments…..

One rainy afternoon we took the Metro to the 3rd and 4th Arrondissement. The Place de la Bastille is a square in Paris, where the Bastille prison stood until the ‘Storming of the Bastille’

Next stop was the Place des Vosges. Here is one entrance.

The Place des Vosges is the oldest planned square in Paris and one of the finest in the city. It is located in the Marais district, and it straddles the dividing-line between the 3rd and 4th arrondissements of Paris.

That same street we entered Place des Vosges, we stopped off at this patisserie …..

I took this picture while relaxed and waited for our food…her look reflected the sombre mood of the city that rainy day….

TWO types of cheese – one a creamy blue cheese topped this burger, beneath the burger is ham and tomatoes!!!!!! 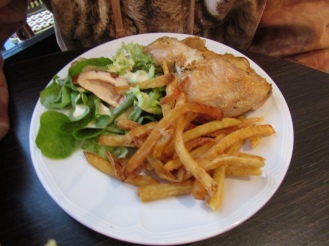 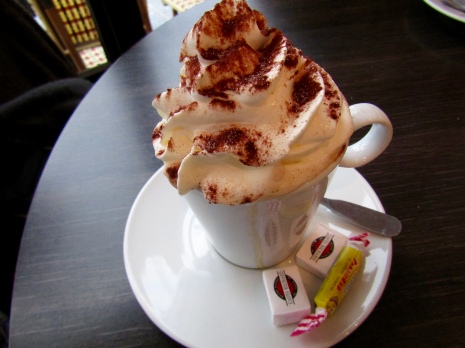 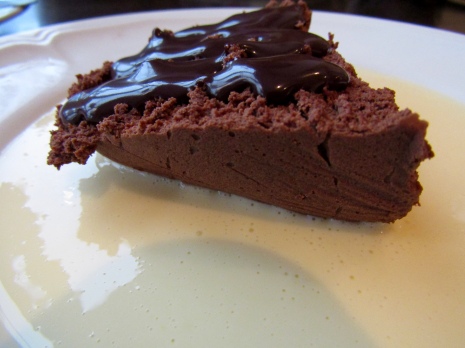 This “soft chocolate cake” was between a mousse and fudge with a cool crème anglaise beneath it!!!

These next four pictures are at a street market across from the Eiffel Tower!!

This Almond nougat was DELICIOUS!!

We just had breakfast, so we passed on these servings of yumminess!! 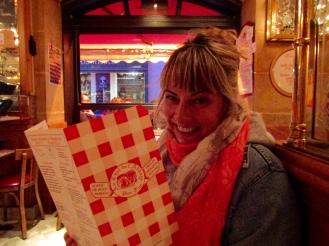 That evening…..Our final evening (after a day at the Eiffel Tower!!) we returned to the restaurant across the street from our apartment…

SO RELAXED AND HAPPY!!!

We both ordered what I had our first evening here…the filet de boeuf s. capes gratin dauphinois.

Close up of what the chocolate ice cream looked like!!!!

Dogs are allowed into restaurants in Paris!!! Can you find the pug?? 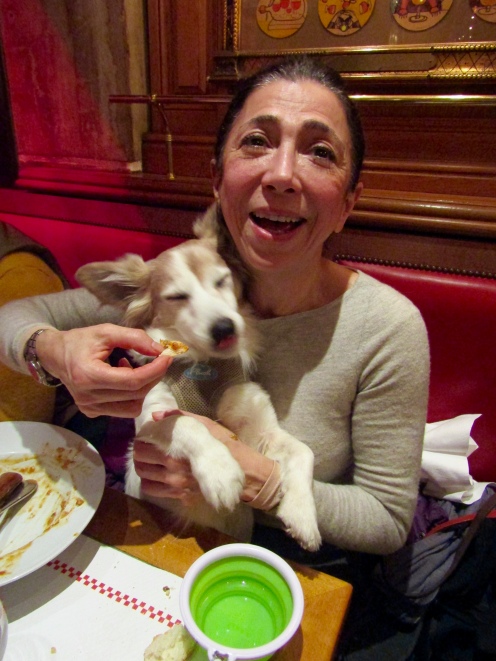 This woman and her dog were sitting behind us!! 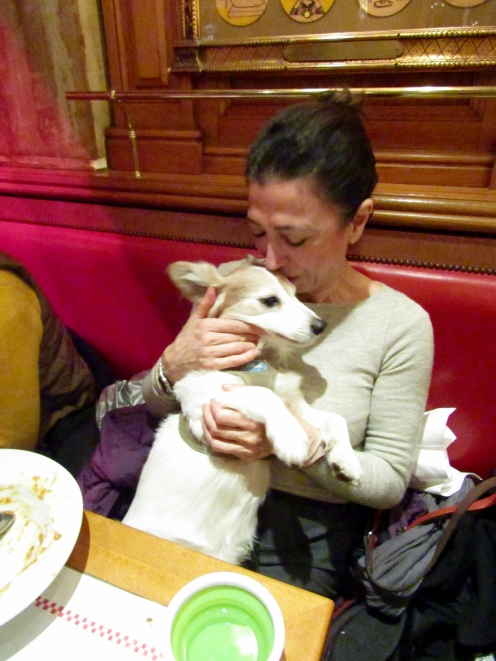 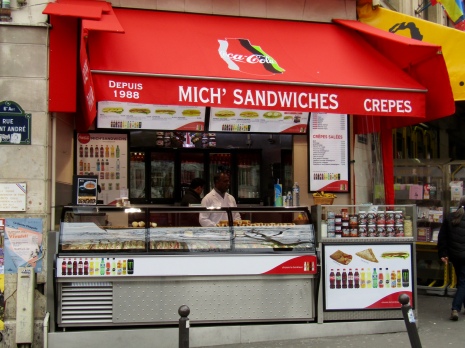 Walking around during our last day, we made our way from our 6th arrondissement to the 5th – into a very popular neighbourhood of the Latin Quarter called Saint Michel. It was time for me to have a hot dog!!!! 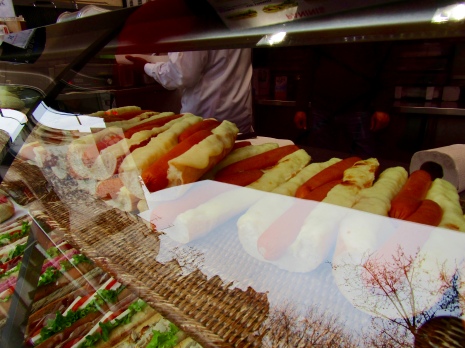 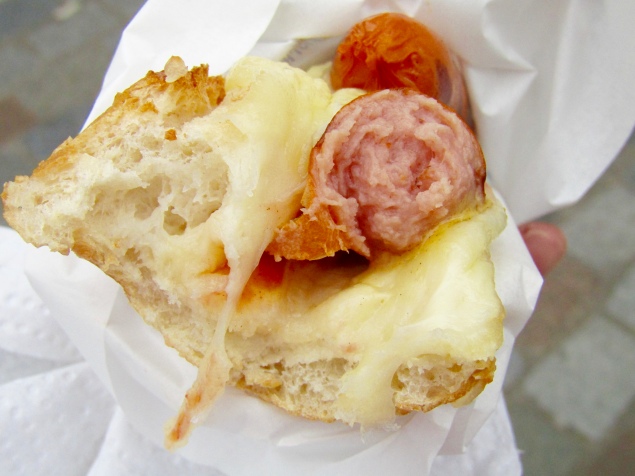 This hot dog is served on a baguette with cheese, a small amount of ketchup and the ever present in Paris …HOT (LIKE WASABI) MUSTARD!!!!!! 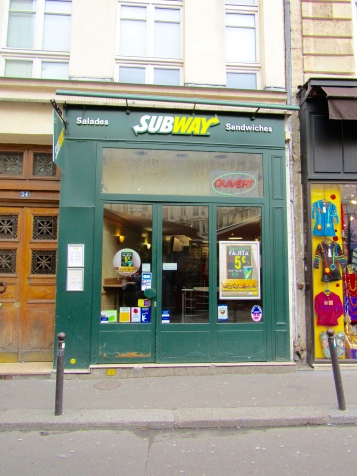 The narrow streets of St Michael are lined with cafes, shops, bistros, restaurants as well as sex shops that discretely and tastefully sit along side them. 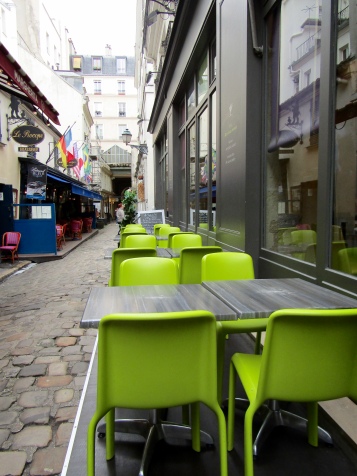 Or browse a book store that was started by bookshop owners in 1886!!! Gibert Jeune is a Parisian bookshop founded in 1886 by Joseph Gibert, Quai Saint-Michel .

The Place Saint-Michel is a public square in the Latin Quarter, on the borderline between the fifth and sixth arrondissements of Paris, France. It lies on the left bank of the river Seine facing the Île de la Cité, to which it is linked by the Pont Saint-Michel. 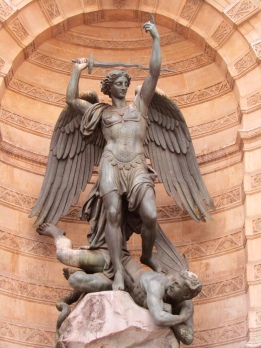 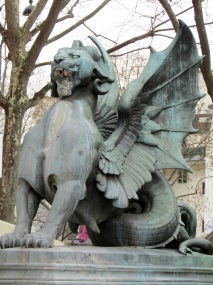 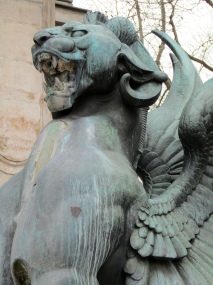 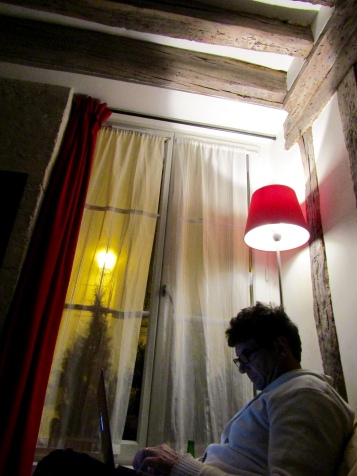 Relaxing back in our Airbnb apartment!!! 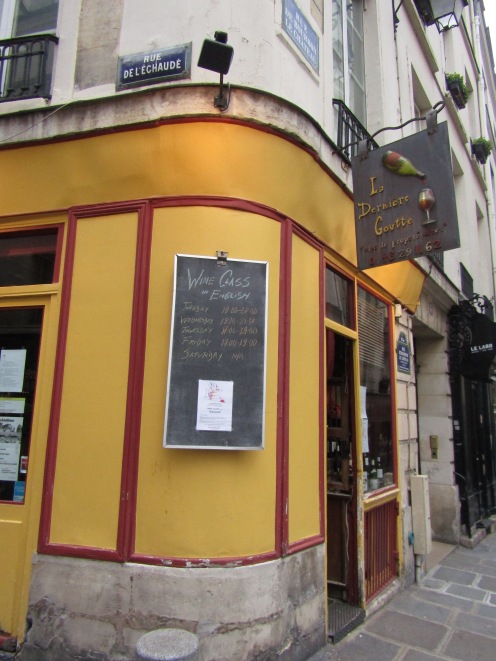 The wine shop on the corner where I bought wine!! 3 EUR’s for a GOOD bottle of wine!!!!

The Abby behind our street that Saint-Germain-des-Prés is located around. 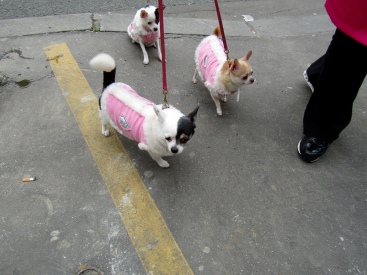 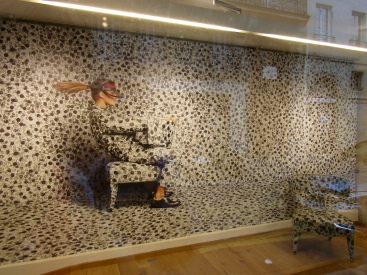 Window display in a fabric shop. Michael thought this was really cool!! 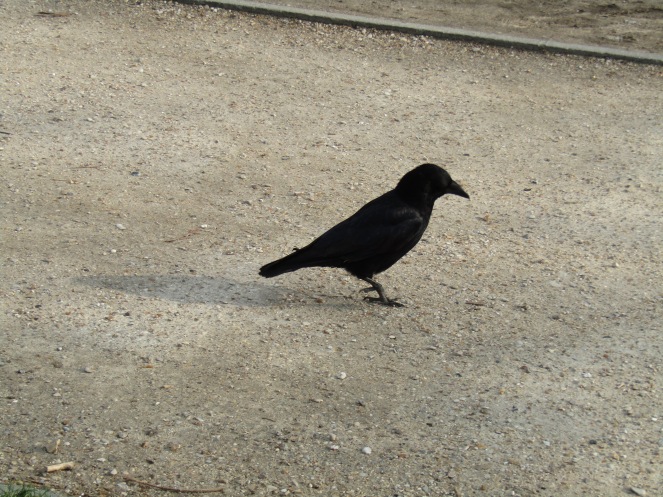 I miss crows!! Qatar does not have crows!!! 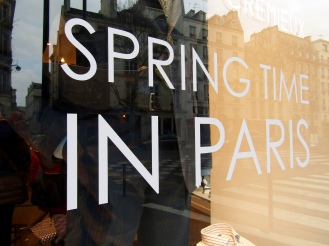 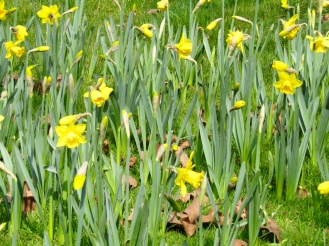 It was SO WONDERFUL seeing the same flowers blooming that I would see back in Halifax!!

Sax player in the tunnels of the Metro! 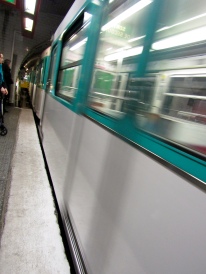 Waiting to the Metro train to slow down and board it!!

Accordion player entertaining everyone on the Metro train…with a purse for offerings after his show!!